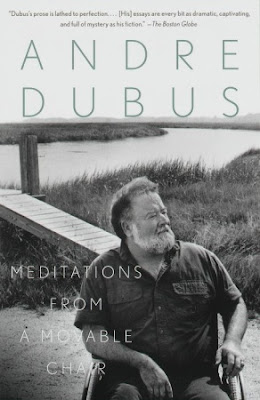 American writer Andre Dubus was born on this date in 1936, in Lake Charles, Louisiana. He was almost fifty years old, an ex-Marine, father of six, a prolific short-story writer and a respected writing instructor when he stopped to help an injured woman and her brother on the road. The three were hit by an oncoming car, killing the brother. Dubus saved the woman by pushing her to safety, but his own legs were crushed by the car instead. One amputation and years of surgery and therapy followed, and for the rest of his life Dubus used a wheelchair.

In his post-accident life, Dubus published two further books of essays, a collection of short stories, and numerous contributions to literary magazines. One of the essay collections, his last, was Meditations from a Moveable Chair (1998, cover at right shows a bearded Dubus in a wheelchair, near a ramp in a swamplike exterior). A comment here earlier this week pointed out that the title story of Dubus's second-to-last collection, Dancing After Hours (1996), features Drew, a wheelchair user and his assistant, and a waitress who has a strong memory about listening to Rahsaan Roland Kirk. (Ruth at Wheelie Catholic made note of Dubus last year, too.)