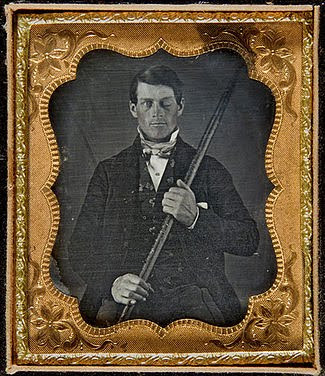 The image above, a daguerreotype of Gage taken after the accident, was only identified as Gage this year (2009). Until recently, the private holders of the image (Jack and Beverly Wilgus) believed it was an unnamed whaler, holding a harpoon. They said as much when they posted the image to Flickr. A Flickr commenter told them that the iron bar was no harpoon; another suggested this might be a photo of Phineas Gage, and that turned out to be the case. (Yeah for Flickr commenters!)
Posted by Penny L. Richards at 2:03 PM

Given that I am set to give a talk at a local museum on Phineas Gage, this was an especially helpful post for me, so thanks.

I was somewhat aware of how little we actually understand about what happened -- and did not happen -- to Gage, but several points do leap to mind here. The first is that in preparation for the talk, I have come across countless sources suggesting what happened to Gage is somehow evidence of the mind-body split, when of course it stands for precisely the converse, in my mind.

However, the danger of (properly) rejecting mind-body dualism has tended of late to lead us down the road to neuroreductionism, in which Gage is cited as proof that mind is nothing but physical brain (itself a grievous category error, IMO).

Second point is just me thinking out loud: to what extent is the fame of Gage despite the dearth of information suggest his importance is largely symbolic? (Symbolic "of what" being the critical question, but that leads me back to my first question, and may have implications for disability studies related to theories of mental illness, etc. I'm reminded here of the curious persistence of the chemical imbalance theory of depression, which has been eviscerated numerous times by countless studies, yet still dominants popular discourse).

I think you're right, Daniel--he's become mostly a symbol; a convenient anecdote, and a memorable name (never underestimate the value of a great name like "Phineas Gage"). And he's obviously not the only disabled person in history to meet that fate. One reason I like to revisit such stories is to find the complex life that preceded the shorthand reference.

Good luck with your talk! Was it scheduled before or after the news of the daguerreotype broke?

Disability studies, and disability history has impressed upon me the importance of giving voice to the lived experiences of the people I think about, and I appreciate the reminder to do so here as well (not that you intended it as a reminder, but I will seize the opportunity to be so reminded . . .

The talk is based on this exhibition (Matthew Day Jackson):

As far as I know, had nothing to do with the daguerrotype, the existence of which raises all sorts of fascinating issues itself related to the power of the photograph, of the power of the visible body, etc.

Hey Daniel, I notice one of the extreme activities mentioned in the exhibition description is drag racing--a subject I know more than a little about, as several past entries on this blog will attest. (Even wrote an entry about a drag bike racer for the new Encyclopedia of American Disability History.) Never thought of it in any connection to Phineas Gage, though!