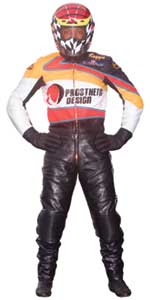 Sara at Moving Right Along gave me a great opening for my annual post combining my interests in disability studies and NHRA drag racing. (My 2005 post on the subject is here.) She writes:

Which gives me an opening to write about double-amputee motorcycle drag racer (and one-time Temple University student-to-be) Reggie Showers (b. 1964; shown at left). Showers, a "bilateral transtibial amputee" since he was electrocuted in an accident at the age of 14, was a Pro Stock Motorcycle racer, piloting a custom bike down the quarter-mile track at more than 180 mph. Showers began racing in 1989 on the International Drag Bike Association circuit, and won the IDBA championship in 1990. At one point, he held fourteen world records in drag biking. He toured with his prosthetics specialist, Tracy Slemker of Prosthetic Designs, doing educational outreach at racetracks during NHRA events. (His racing legs were specially designed for maximum control and minimum weight--so on race day, he was five inches shorter than he was in his everyday legs.) Showers isn't racing anymore--he finished his pro career after the 2003 season. 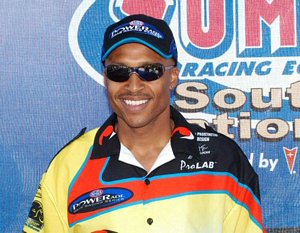 Said Showers of his hi-tech legs:

I remember back in the late'70's when the accident happened, being very ashamed of being an amputee or "handicapped" person. The word "handicapped" did not sit well with me. Now, in the year 2000, being so-called "disabled" is pretty trendy, pretty chic - I like to show off my legs, I think they're very trick! I like the stares now, I like when people look at my legs. They look at me walk, and it makes me feel good - it makes me feel proud.

And here I thought I sounded too Seuss-ulous!

You've probably seen this before, but for other amputees who are inspired and might want to get on motorcycles (unlike me; I prefer to avoid situations where speed and gravity combine forces; I have enough arguments going just with gravity, thank you), here is a page my true love found about a year and a half ago listing useful tips for adaptations:

"Getting On the Road: Adaptive Modifications for Amputee Motorcycling," By Jeffrey J. Cain, M.D.

These are more for beginners, I think, or people going back to the roads, not so much for people who are ready to follow in Mr. Showers' footsteps -er- tire tracks.

Oh cool, thanks for that link, Sara. I'm with you, gravity and speed are not my favorite combination for personal experience--even downhill skiing is a big "No thanks, I'll watch everyone's bags in the lodge and drink cocoa while I read, you all go have fun"...

i have recently been involved in an accident which resulted in having my left leg amputated from the knee down. I wonder if my motorbike insurance company will cover the cost of one high-tech leg so i can carry on riding. Its a brilliant idea and i am going to spend the rest of the day researching the possibilities. Thanks for the inspiration.