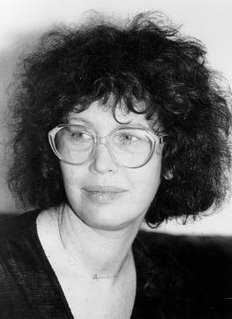 When I am depressed, I am less than a driven leaf.

Today (or November 27) would have been the seventieth birthday of Israeli poet and translator Dahlia Ravikovitch (also sometimes found as Dalia Rabikovitz), who died last year in Tel Aviv (suicide was presumed, but later dismissed, as the cause). Ravikovitch has been called "the greatest Hebrew woman poet of all time," and her ten books of poetry include verses taught to Israel's schoolchildren and set to music. She also translated poems by Yeats, TS Eliot, and Poe, as well as PL Travers's Mary Poppins. She slept days, and wrote in the night. She wrote only by hand (no typewriter or computer), and kept every draft she ever penned, back to school notebooks from childhood.

Ravikovitch spoke and wrote about her life with depression, including hospitalizations and several suicide attempts. One of the stories in her collection Winnie Mandela's Football Team (1997) is set in a psychiatric hospital; her poem "Pride" ends with the lines

I told you, when rocks crack, it comes as a surprise.
All the more so, people.