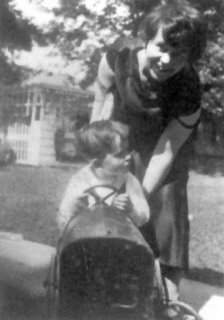 There's just a little sentence in the online catalog entry about the Dawn Powell Papers at Columbia University Rare Books and Manuscripts libraries: "There are 4 scrapbooks of her husband, Joseph R. Gousha, recording the plays he saw in Pittsburg [sic] from 1910 to 1914, and 4 journals of her son."

What's in those four journals of Joseph R. Gousha Jr.?

There's a disability history project calling out to be done here. Joseph Jr. is one of the so-called "hidden horde"--a man with autism born decades before autism was named. His isn't a pretty story, but it's well-documented, because his parents were both writers; and it's well-preserved, because his mother Dawn Powell was a novelist and playwright of some note. She kept diaries and wrote letters, too--and she wrote a lot about her only son. The story of Joseph Jr. (he was called "Jojo" by family in his life, but I'm going to call him by his formal name) is in there--here are the outlines I can glean from online accounts of Powell's life:

Joseph Gousha Jr. was born 22 August 1921, in a difficult delivery, in Manhattan. He was the only child of Dawn Powell (1896-1965) and Joseph Gousha (1890-1962), both writers, though his father also had a career in advertising. By the time young Joseph was three or four (about the time the photo above was taken, with his mother), it was clear that he was different from most children--he got labeled "retarded," and "schizophrenic," but most accounts agree that "autistic" would be the label he'd have today. His parents hired a live-in nurse, Louise Lee, who stayed with them even during Joseph Jr.'s frequent hospitalizations and residential school placements, beginning in the late 1920s.

Here are some terse lines about him from Dawn Powell's 1930 journal entries:

July 28. jojo came in from country to go to Mt. Sinai with Louise and Bobby. Sick-looking.

October 28: Worried alternately about book and Jojo. One worry lulls and absorbs the other.

November 2: Took Jojo to Dr. Jamieson's at Seagirt [New Jersey] for school. Beautiful place but it was hard on the poor little darling and me too.

In 1938, the 17-year-old Joseph was moved to Gladwyne Colony in Vally Forge, PA, where he lived for the most part until 1952. In 1947, he injured his mother during a home visit, requiring Powell to be hospitalized for more than two weeks. In 1954, Louise Lee left the Gousha household because of her own declining health, and Joseph's parents looked into a lobotomy to make his behaviors less violent; novelist and family friend John Dos Passos is said to have dissuaded them from this course of action. Joseph's parents both became ill in the late 1950s, and both died from colorectal cancers in the early 1960s. His guardian thereafter was his mother's cousin Jack Sherman, who recalled in a radio interview about Powell, "She loved Jojo very much, but realized there was nothing much she could do for him." Joseph R. Gousha Jr. died in 1998, at the age of 77.

If you're looking for more information, or you need a project and you live near New York City, those four journals of Joseph Gousha Jr., should be worth a peek, no?
Posted by Penny L. Richards at 12:55 PM

Anonymous said...
This comment has been removed by a blog administrator.
4:54 AM

Anonymous said...
This comment has been removed by a blog administrator.
4:28 AM

Anonymous said...
This comment has been removed by a blog administrator.
8:46 AM

Anonymous said...
This comment has been removed by a blog administrator.
8:34 AM