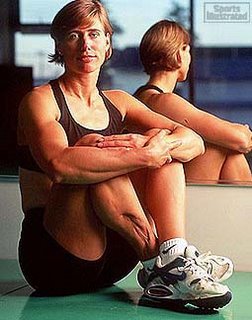 Before '92 I was a strong person, but I wondered how strong I would be if something bad happened. Then something bad did happen and I didn't wallow in sorrow. I just figured, O.K., what do I do now?

Canadian rowing champion Silken Laumann (left) was born on this date in 1964, in Mississauga, Ontario, the daughter of recent immigrants from Germany. She earned a bronze medal at the 1984 Olympics, and was on the Canadian rowing team for the 1988 Olympics. While training for the 1992 Games, her right leg was badly injured in a collision between two boats. After winning the bronze in Barcelona anyway (two months later), she took off a year for further surgeries and rehabilitation, then returned to win a silver medal in the 1996 Olympics. She's now retired from competition, and does motivational speaking, and advocacy for inclusive and creative children's play and fitness programs, in Canada and abroad (through Right to Play).
Posted by Penny L. Richards at 7:42 PM