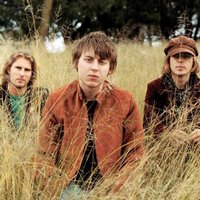 It's too, too typical to find newspapers using highly presumptive language in relation to disability. Even if the subject of a photo is smiling, clearly enjoying life, the caption will say "Jane, who suffers from cerebral palsy," while the headline reminds you of her "affliction," just in case you were thinking she looked happy, comfortable, or even lucky. The print edition of the LA Times today has another instance of this presumption: on page E44, in the Calendar section, we find a photograph of the Australian rock band The Vines, with the caption, "Off the Road: The Vines' ailing singer Craig Nicholls, left, with bandmates Ryan Griffiths, Patrick Matthews, and Hamish Rosser." Ailing? Wow, that sounds awful... even life-threatening... but wait, look, in the text of the article by Chris Lee, we learn that Nicholls (at the center of the photo here) was recently diagnosed with Asperger's syndrome.

The Guardian has a better and more extensive treatment of the story, maybe because reporter Craig McLean actually asks Nicholls what he thinks of his own diagnosis (for the record, he says, "it made a lot of sense to me....It was kind of a relief. It was more like an explanation").
Posted by Penny L. Richards at 8:55 PM