This IS the plan

NPR picked up the story of Carol Reyes, an elderly homeless woman from Gardena, CA. When she was released from the Kaiser Permanente hospital in Bellflower, CA, she was put in a taxi, which drove sixteen miles to downtown Los Angeles. There, the taxi was instructed to drop her off on Skid Row--and it did. The security cameras at the Union Rescue Mission caught the whole sequence: taxi makes U-turn, woman in hospital gown and socks walking down sidewalk, disoriented. It's not the first time this has happened; it's just the first time they've got such clear video of a patient dumping in progress. This is, apparently, a fairly regular occurrence -- hospitals and jails in surrounding cities discharge folks (often PWDs) with no place to go directly to Los Angeles's Skid Row (the photo at lower right is from today's LA Times coverage of the story--the caption doesn't bother to point out that two of the homeless men here are in wheelchairs--see also columnist Steve Lopez's series about a week on Skid Row--most of the photos include wheelchair users). 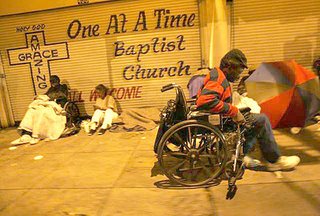 What happens when city planners and health policy folks don't take disability into consideration? Or worse, when they decide that some people are not worth bothering to plan around at all? Sometimes, Katrina happens, and there are people dying in their wheelchairs at the Superdome; sometimes, it's a quieter abandonment, and a woman is left padding along an unfamiliar street in cheap hospital socks, in a city that should know better.