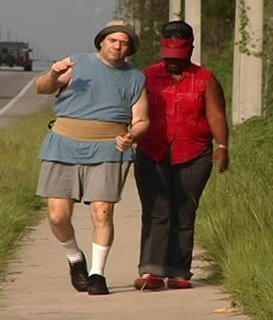 The Florida Film Festival, to be held March 24-April 2 in Orlando, will include a screening of the award-winning 24/7, a film about Florida's underfunded in-home support services for families with developmentally-disabled members (the photo at left is a still from the film). The filmmakers, Mary Fallon and Daniel Priest, made this as their master's project at the University of Florida's Documentary Institute. Other very recent documentary films of interest on the schedule include 81-Year-Old Sweethearts, a short (the sweethearts in the title are both wheelchair users); and four films about individual men's experiences with disability: So Much So Fast, about a thirtysomething man getting an ALS diagnosis; Black Sun, about Hugues de Montalembert, a seasoned traveler who plans a trip to Indonesia after becoming blind; The Devil and Daniel Johnston, about the noted songwriter who has experienced mental illness; and You're Gonna Miss Me, about Roky Erikson (a rock vocalist who was institutionalized in 1969, and diagnosed as schizophrenic).

If you can't get to Orlando, watch for these films at your nearest film festival--they're all currently making the rounds (check the linked websites for each film's schedule).
Posted by Penny L. Richards at 6:51 PM

Thanks for the list, Penny. I'm looking forward to the festival. (I'll let you know how 24/7 is.)
Carolyn