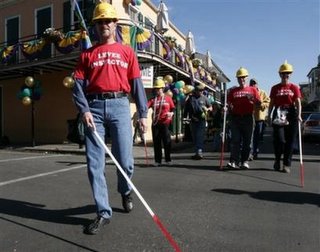 A team of "blind levee inspectors" at a Mardi Gras parade in New Orleans this week.

Were levees really maintained entirely by human visual inspection? I'd think there would be other technologies involved--equipment detecting disturbances in the surface and flow of the water behind the levee, for example. Such equipment might easily be monitored by blind engineers. Hardhats or no.

But beyond that quibble--disabled people, including blind people, were disproportionately affected by the disaster that followed Hurricane Katrina. (Too many commentators asked, "Why didn't they get in their cars and drive out of there at the first warning?" Well, being blind might be one reason not to drive yourself to safety, huh?) Why add to the pain with this kind of cheap shot? I know, I know, the costumes at Mardi Gras parades are often transgressive, tasteless, etc. Other costumes spotted at this year's parades were maggots, sandbags, toxic waste, Michael Brown, blue tarps, and such. But this photo (found at Pam's House Blend) captures so much of the continued cluelessness about disability and disasters.
Posted by Penny L. Richards at 1:49 PM