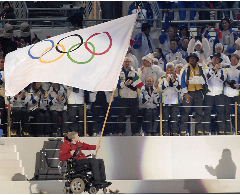 February was short, but the supply of recent blog roundup items on disability is not. As always, there are several new-to-me disability blogs worth a peek: Carrie Ann Lucas had a lovely post about talking to her daughter about Rosa Parks and accessible buses; in another civil rights intersection, Joseph Rainmound at Deaf in the City notes that "Deaf people and gays both get kicked in the ass for much of the same reasons," so he's calling for some unity there.

Vancouver mayor Sam Sullivan's flag-waving at the closing ceremonies of the Winter Olympics (pictured above) caught a lot of mainstream interest (and multiple appearances of the words "inspiring," "overcoming," "wheelchair-bound" *sigh*)--but the real sports action is at Rollingpix, where you'll find coverage of wheelchair tennis right now, but all wheelchair sports (and a few others) are linked in the sidebar. Also, Gimpy Mumpy and Ruth (at In the Name of Quad) pass along the good news that the Paralympics will be available as a webcast--they start next week.

Vancouver, then Valentine's--well, V-Day, anyway. And V is for vocabulary: How do you sign orgasm? There was a long discussion about this at Quiescent Voices. And more interpretation challenges came up at Short Bus Queen--it seems all her students have an "Emergency Tossing List," or so she wrote in a Spanish letter to parents. (Lesson learned: Beware the online translators.) And speaking of special education teachers, Square Girl tells of her New Agenda: to spend "a lot more time and energy noticing the people who... are already compassionate, inclusive and simply kind."

Kestrel's posted the ever-circulating (but still good) "What to do when you meet someone who is differently-abled," in which she passes along the advice that "Sighted people tend to be very proud and will not ask directly for assistance." But then, the world is full of dubious and uninvited advice to people with disabilities, notes Gimpy Mumpy. And dubious labels too: Eeka at One Smoot Short of a Bridge explains that there's a difference between ADA compliant and fully accessible, a difference which has escaped at least one agency's pamphlet writer. Luckily, there are also plenty of apologies to be had--probably too many, to Mary Johnson's thinking, because "apologies aren't enough."

Cool stuff: monster tires at the beach, comfortable beer mugs, tactile Rubik's Cubes, temperature-coded shower heads, large-print keyboards. Students who are interested in disability rights and disability studies are pretty cool too: Sarah at Musings from a Very Small Suitcase had a great visit with the Backus Street ADAPT folks in Rochester NY (check her schedule, she may be coming to your town next); while Franny at So, So Silver Age is writing about disability and comic-book superheroes--yes, "enfreakment is a real word."

And on that note, I'll close the March Madness...er, blog roundup (forgive the slip--I'm a UNC alum, married to a Duke alum--that's a mixed marriage this time of year). Watch in early April for the next installment, and suggestions are always most welcome.