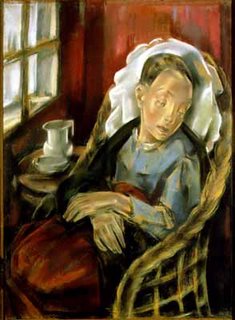 Today is the 125th anniversary of the birth of Maria Gutierrez-Cueto y Blanchard, a Spanish Cubist painter who was born this date in 1881 in Santander. Blanchard was called "jorobada," or hunchbacked, from birth. She trained as an artist in Madrid, and found some success as a painter in Paris, before her early death in 1932, from tuberculosis. Federico Garcia Lorca wrote an elegy to Blanchard. Most of the websites I found about her were in Spanish (as might be expected), but I also found this bio, in Dutch. The late painting at right, "La Convaleciente" (1930-32, found here), indicates that Blanchard's disability experience was reflected her work. Has anyone looked at Blanchard's life and work from a disability history perspective, in any language? I'd love to know.
Posted by Penny L. Richards at 12:27 PM