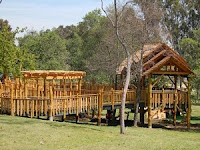 Torrance, California, comes in for no end of mockery. It's called "Borrance" by some, and music fans may remember director Spike Jonze's ironic "This is for Torrance!" shout-out from the podium at the MTV Music Awards a few years back. Torrance is where Quentin Tarantino grew up. A lot of high-school scenes in movies and television are filmed in Torrance, for some reason.

So, it's hardly a destination on par with Disneyland for the first day of Spring Break. But it's closer (it's the next city over), it's cheaper, and it's got "the first universally-accessible treehouse in a public space in California"--which is what we went to check out today. The treehouse was funded by the Annenberg Foundation, designed and constructed by the national non-profit Forever Young Treehouses in collaboration with the local non-profit Pediatric Therapy Network. It's in Charles H. Wilson Park, which also features a skatepark, tennis courts, batting cages, basketball courts, a baseball diamond, a hockey rink, a duckpond, picnic areas with grills, and a playground near a large open field with a hill. (The playground is not even a little bit accessible--it's built in sand, for one thing.) On Tuesdays and Saturdays, you'd also find a bustling farmers' market in the parking lot nearby. (Stop at the pupusa stand for lunch. I always do.)

The treehouse was made with environmental sensitivity in mind, according to the Annenberg website:

The treehouse decking is made of stamped, sustainably-harvested South American Ipe wood, and the oak posts were recovered and repurposed from fire-damaged forests in southern Oregon and trees damaged by grazing horses. The wooden branches in the arbor are recycled; they would normally have been chipped or thrown away in the logging process. The helical pier foundations are among the most environmentally sound methods for placing posts near living trees. The design and placement of the treehouse will enable the adjacent trees to grow unimpeded.

There are many photos of the 2500-square-foot treehouse online here (including the photo above).

The on-the-scene report: it's still in great condition after a year's use. Accessibility isn't just accomplished with the no-steps, no-ladders entry--there are also wide smooth walkways throughout, and sturdy railings. It's "just" a treehouse--no built-in toys or anything--but it's big, and most of the kids who play there seem to get a kick out of chasing each other around the structure. The wider "rooms" would be fun places for a group of children to sit together for a circle time. I liked that there were parts that were very shady, and parts that were sunny--nice variety there. It's not especially close to any parking, though the parking area for the park itself is large and otherwise accessible.

So, if you're feeling the need for a treehouse and you happen to be within a few miles of LAX, it seems Torrance is the place. (And I'm stunned to learn that Nay Aug Park, in the city of my birth, Scranton PA, is the process of getting an accessible treehouse from the same designers--hmm!)

I just thought I'd pass along my website that contains several photos of the NAY AUG treehouse project in Scranton PA. I'll be updating the site as progress continues.