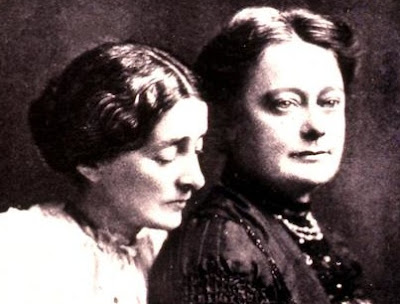 English Egyptologist Margaret Benson was born on 16 June 1865. Her father was the archbishop of Canterbury (1882-1896). Margaret wintered in Egypt for her health during the 1890s, which was not an uncommon measure among the "delicate" in her class. But while there, she studied hieroglyphics and Islam, and got permission to conduct excavations at the Temple of Mut at Karnak. She even dressed as the goddess Mut for a fancy-dress ball, in a costume of her own devising (including a "vulture headdress"). Wrote her brother, classicist and fiction writer EF Benson:

Did ever an invalid plan and carry out so sumptuous an activity? She was wintering in Egypt for her health, being threatened with a crippling form of rheumatism; she was suffering also from an internal malady, depressing and deadly; a chill was a serious thing for her, fatigue must be avoided, and yet with the most glorious contempt of bodily ailments which I have seen, she continued to employ some amazing mental vitality that brushed disabilities aside, and, while it conformed to medical orders, crammed the minutes with such sowings and reapings as the most robust might envy.

Margaret Benson returned to England (her health had not improved after three Egyptian winters), and published a book about her explorations (co-written with her partner Janet Gourlay, 1899). The next year, Benson had a heart attack. Within a decade, she was staying on the grounds of a private mental hospital; it was believed that her scholarly and spiritual exertions in writing her eight-volume book The Venture of Rational Faith (1908) had too severely taxed her brain. Margaret Benson died in 1916, at the age of 50.

[Image above: Janet Gourlay and Margaret Benson, photographed together in a 1906 portrait; Gourlay is looking downward, from behind the shoulder of Benson, who is gazing off to the right]
Posted by Penny L. Richards at 1:09 PM