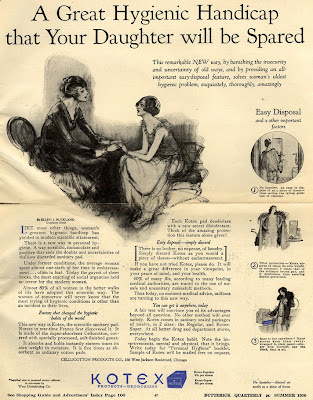 I had to depart the conference after lunch on Day 3, so I was only able to attend one panel--but it was a good one. If I had missed my flight to see David Linton's talk and eat mango cheesecake, it would have been absolutely worth it.

Linton's talk was about the use of "handicap"/sickness/cure language in Kotex advertisements of the 1920s--he had the room (which was spilling into the hallway) gasping and exclaiming with his visuals, many of them found at Duke University Archive's wondrous Ad*Access site (part of the Digital Scriptorium). At left, one of his examples: "A Great Hygienic Handicap that Your Daughter will be Spared," reads the headline on this 1926 ad, illustrated by a drawing of two seated women (presumably mother and daughter), slim and in stylish dress, clasping hands as if they're having an important talk ("the talk," as Linton put it). The small-print text extols how "Like most things, woman's greatest hygienic handicap has yielded to modern scientific attainment."

Linton had the deadpan vocal delivery of a presenter on This American Life, too, where lighter hilarity wouldn't have served the topic--after all, these aren't just quaint old advertisements, if you remember what terms like "hygiene" and "modern scientific attainment" were also about in 1920s America, in the heyday of eugenics and Americanization. (Linton is also known, on excellent authority, as "the funkiest man on skates," a claim that nobody could challenge after Friday night's dance--and he wasn't even wearing skates at the time.)
Posted by Penny L. Richards at 9:26 AM

Really enjoyed your posts from the SDS conference!

Hi Penny - thanks for keeping us informed. It is a real harship for some us to attend SDS. Others only attend when the conference is held in their backyard. Of course, a lot of the 'juice' at SDS takes place behind the scenes, and I am sure I will hear about them over the SDS listserv. Any idea where the conference is going to be held next year? Rockville again? MD

I heard that the goal is New York City, but that it's not a firm plan yet--soon, I guess.

Honestly (and you've heard me say this before), I'd be happy if conferences were all online--they're fun to attend, sure, but they're expensive and wasteful, and they leave a lot of people out. At least adding an online component would be more inclusive.