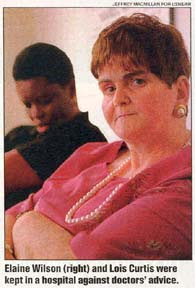 Gimp Parade, Wheelie Catholic, Six, Almost Seven, and other blogs have noted that today is the eighth anniversary of the US Supreme Court upholding the "Olmstead decision," L.C. and E.W. v. Olmstead, in which a district judge ruled that "Unnecessary institutionalization amounts to segregation and is a violation of individual civil rights." There will be marches and celebrations marking this day--conveniently situated on the first Friday of summer.

But who were the L.C and E.W. of the case's name? Lois Curtis and Elaine Wilson were the plaintiffs designated by those initials. Elaine Beverly Wilson of Atlanta was brain-injured by a high fever in infancy. Elaine attended public school at first, then a succession of private and specialized school. At fifteen, she came home from residential schools, but her family couldn't handle her behavior. She lived in mental institutions or on the streets for much of her life; she endured shock treatment and psychotropic drugs. "I felt like I was in a little box and there was no way out," she testified to the judge. After the 1999 decision, Elaine Wilson moved into her own home, with support. She enjoyed shopping and welcoming visitors, before her early death in December 2004, at the age of 53.

Lois Curtis has a similar story: she's an Atlanta native who spent years in state-run institutions. She also lives in the community now, and enjoys painting and writing. A painting by Lois Curtis, representing the course of her life so far, was displayed in the Temple Gallery in Decatur in Fall 2005, and her creative work has since been exhibited across the US.

The case might have been won with other plaintiffs; but it wasn't. These were the women who sat through the tedious days and weeks of courtroom procedure, through the Supreme Court appeal, and waited, who told their stories, knowing their own lives and the lives of countless others would turn on the outcome.

[Visual description: Image above shows two women, one closer to the camera, one further in the background. The woman closer to the camera is on the right, in a pink shirt, pearly necklace, and earrings, with her arms crossed over her chest, meeting the camera's gaze with an expression I'd call "determined." The woman farther from the camera is looking down at her upper arm, and is wearing black. The woman in pink is Elaine Wilson; the woman in black is Lois Curtis. Wilson is white, and in her late 40s at the time of the photo; Curtis is African-American, and about thirty. Image from the CDCAN report of 27 April 2007.]
Posted by Penny L. Richards at 6:34 PM

Running in the (self-)advocacy circles I am so very fortunate to have found in Atlanta, I often have the great overwhelming pleasure to visit with people like Elaine and Lois..

A maybe slightly OT observation :: Our movements have such an abundance of happening right now movers and shakers.. They are our history makers, our movements' unassuming stars.. They don't travel with press, paparazzi, pampering entourages, overly-doting fans.. They instead walk very quietly among us, with grace, dignity, and pride, seemingly unaware of the millions of Lives impacted daily by their accomplishments..

Cyber hugs to All my personal Heroes.. :)

It's great to see the faces behind the changes - it humanizes the "facts" as they come across in court cases/ rulings.

So good to see you have a few more details about these amazing women. And an excellent photo of Elaine.

I met Lois. We have some of her artwork hanging in our office. You don't often get to meet someone who changed history.

She was here supporting the Campaign for Real Choice's, Illinois'Freedom Rides in 2005. It was an eight-city, tour 700 mile tour on a bus through Illinois to educate the public about a lack of community living options for people with disabilities. We really felt honored to have her here. Thanks for sharing her story.

Anonymous said...
This comment has been removed by the author.
2:52 PM