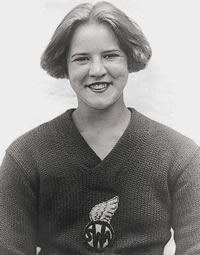 Also born on October 23 (either 1905 or 1906, sources disagree--if the latter, this is her centennial), American swimmer Gertrude Ederle. She began breaking amateur records at the age of 12; by 18, she had won three Olympic medals, and was preparing to cross the English Channel. In 1926, on her second attempt, she made the crossing, hours faster than any man had ever done. She was the first woman to swim the Channel, and was greeted with a tickertape parade on her return to the US.

Why is this a disability history story? Because Ederle was deaf, beginning with the effects of severe measles in childhood. After WWII, Ederle taught swimming for years, to the students at the Lexington School for the Deaf in New York City.
Posted by Penny L. Richards at 9:42 AM