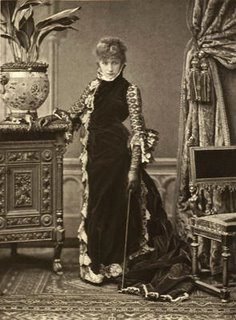 Today marks the 162nd anniversary of the birth of French actress Sarah Bernhardt, born Henriette Rosine Bernard in Paris on this date (or this week, anyway--sources disagree as to the precise date) in 1844.

In 1905, she injured her right knee during a performance in Rio de Janeiro. Ten years later, when Bernhardt was 71, she had the leg amputated, and began to use a wooden prosthetic leg. Bernhardt's fans, and there were many, waited anxiously for news of her recovery. The story goes that the manager of the Pan-American Expo in San Francisco sent a telegram, offering her $100,000 in exchange for the right to exhibit her leg. Bernhardt's reply message said only "Which leg?" (She did not accept the offer.)

Bernhardt appeared in several stage plays and in at least two films after her amputation. Theatre historians believe that the change may actually have improved her acting: without access to grander physical dramatics, she chose roles carefully, and concentrated on the use of her 'golden' voice, facial expressions, and subtler gestures to communicate character.

The Sarah Bernhardt Collection at the Harry Ransom Humanities Research Center at the University of Texas at Austin
Posted by Penny L. Richards at 11:06 AM