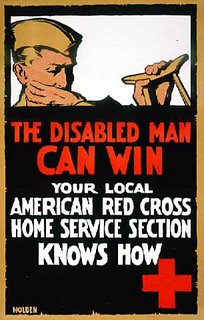 I am rather surprised to find how little the quite young girls seem to mind the sight of wounds and suffering. They are bright and witty about amputations, and do not shudder at anything. I am feeling rather out-of-date amongst them. (38-39)

Scottish novelist Sarah Broom Macnaughtan, born in Lanarkshire this date in 1864, worked as a volunteer nurse during wars in the Balkans, South Africa, and Belgium. Her diaries of her war work were published posthumously as My War Experiences in Two Continents (1919), available online, full-text, open-access at Project Gutenberg. More eye-witness passages:

Now I have got to work at the hospital. There are 25,000 amputation cases in Petrograd. The men at my hospital are mostly convalescent, but, of course, their wounds require dressing. This is never done in their beds, as the English plan is, but each man is carried in turn to the "salle des pansements," and is laid on an operating-table and has his fresh dressings put on, and is then carried back to bed again. It is a good plan, I think. The hospital keeps me busy all the morning. Once more I begin to see severed limbs and gashed flesh, and the old question arises, "Why, what evil hath he done?" This war is the crucifixion of the youth of the world. (198-199)

I heard a voice behind me say, "The blind are coming first," and from the train there came groping one by one young men with their eyes shot out. They felt for the step of the train, and waited bewildered till someone came to lead them; then, with their sightless eyes looking upwards more than ours do, they moved stumbling along. Poor fellows, they'll never see home; but they turned with smiles of delight when the band, in its grey uniforms and fur caps, began to play the National Anthem. These were the first wounded prisoners from Germany, sent home because they could never fight again—quite useless men, too sorely hurt to stand once more under raining bullets and hurtling shell-fire—so back they came, and like dazed creatures they got out of the train, carrying their little bundles, limping, groping, but home. After the blind came those who had lost limbs—one-legged men, men still in bandages, men hobbling with sticks or with an arm round a comrade's neck, and then the stretcher cases. There was one man carrying his crutches like a cross. Others lay twisted sideways. Some never moved their heads from their pillows. All seemed to me to have about them a splendid dignity which made the long, battered, suffering company into some great pageant. (201-202)