Who's the most famous deaf woman born in the 19th-century US South? Hm, probably Helen Keller (1880-1968). But if you've ever been a Girl Scout, the second-most famous would surely be Juliette Gordon Low (1860-1927, shown at right), founder of the Girl Scouts of America. Every little Brownie learns the tale: Juliette "Daisy" Gordon was deaf in one ear from chronic and mistreated ear infections in her youth; the day of her wedding, they say, a thrown grain of rice lodged in her ear, subsequently causing further hearing loss. The story further goes that whenever Juliette Low wasn't getting her way in a meeting, she would pretend to hear "yes" for "no," and say, "Oh good, that settles it, then," taking advantage of her opponent's unwillingness to correct a grey-haired deaf lady (in a formidable uniform--she wore the uniform a lot, and was buried in it after her death from breast cancer at age 66).

Perhaps in connection with Low's disability, the Girl Scouts were open to disabled girls from long before community inclusion or age-appropriate activities were generally embraced goals. The first separate troop for girls with physical disabilities was formed in April 1917, in New York City. There are photos of girls in hospital polio wards in the 1940s, organized into troops by their nurses; and a 1945 pamphlet published by the Girl Scouts of America, titled Girl Scouts All: Leader's Guide to Working with the Handicapped, described "the many opportunities and advantages of membership in the Girl Scouts for handicapped girls," and provides program ideas for girls "handicapped by blindness, crippling conditions, heart disease, tuberculosis, deafness, and diabetes." And this historical legacy is not just for the kids: leaders with disabilities have also been welcome for decades (for example, Priscilla Ferris in the 1950s). 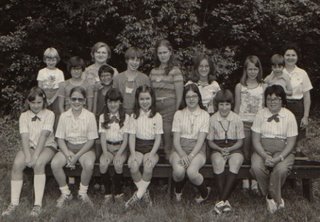 It's not all rosy: Some separate troops remain, and there have been lawsuits charging discrimination under the ADA, and scouting is still notorious for perpetuating "disability simulation" awareness activities of dubious utility. But today, the Girl Scouts will celebrate their founder's birthday, and another cohort of girls will learn about a strong deaf woman--and that's worth a little cheer.

[The image above left is from my own albums. I'm in there, at Girl Scout daycamp, at Camp Laurel in northeastern Pennsylvania, in the mid-1970s. --PLR]

For Marika’s case, GAUSA should have provided for reasonable accommodation for Marika’s disabilities. I don’t understand why GAUSA earned lots of profits from the Girl Scout Cookies. Are the GAUSA are mean selfish bitches?

We always Wow Power Leveling and world of warcraft gold