So there's plenty of chatter about the Michael J. Fox ad about stem cell research, airing in Missouri in support of the Democratic candidate, Claire McCaskill. Whatever position you take on the stem cell issue or the Senate race in Missouri, there are some really disturbing responses to Fox's appearance in this ad. Rush Limbaugh says "he was acting." Other commentators have said the ad is "exploitative"--implying that Fox is somehow unable to choose to speak in a political debate? -- or "in poor taste"--apparently because it's rude to be visibly disabled? (You'd think Ugly Laws were still being enforced.) ImFunnyToo has two posts commenting on the ad and its reception. Zephyr and Mark Siegel weigh in too. 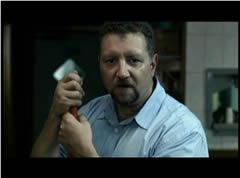 But meanwhile in other political ad news, I found this one: Thug Voter, by Josh Miller and Taras Wayner, isn't new (it seems to have been made in 2004, as one of MTV's Choose or Lose spots), and it isn't easy to watch (or listen to; image at left is a still from the video), but it's one that actually links racism, sexism, homophobia, and disablism in a thirty-second punch.

There are surely others. Keep watching and listening.
Posted by Penny L. Richards at 9:03 PM