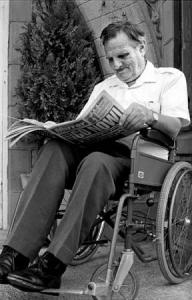 [Thanks to Iain Hutchison for this tip, via H-Disability.]

--A verse from the "Cocoa Song," related by former resident Stanley Byers, right, in an interview in the 1980s

Unlocking the Past is a fine online archive of images, interviews, texts, and video from the Royal Albert Asylum, Lancaster, England, an institution established in 1870, originally as a training school for disabled children, and later becoming a custodial institution for adults with cognitive disabilities. It was closed in 1996. The archives include patient memories like the song above, images of the Royal Albert scouting groups, video, audio, and transcripts of interviews with former patients and staff, architectural descriptions and images, a timeline, an article archive, and so on. It's an ongoing project, inviting contributions from anyone with material to share. Have a look or a listen.
Posted by Penny L. Richards at 9:56 AM