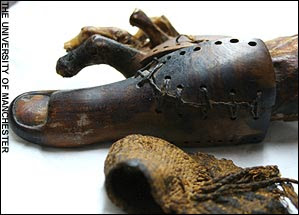 I've always liked the sixteenth-century Ambroise Pare illustration of a prosthetic hand--never actually crafted, but the design is lovely in its intricacy. (A few years back, I got a little notebook featuring the image at a conference, from a table sponsored by the National Library of Medicine.) But it's far from the earliest known evidence of prosthetic ingenuity.

Natalie Bennett posted this, from an article in the Telegraph:

Researchers intend to make a replica of the “Cairo toe”, a bending leather and wood attachment that they believe could be the world’s earliest practical prosthetic. They are seeking volunteers, who are missing big toes on their right feet, to test their theory that the fake toe helped its original user to walk.

(So it has to be the right foot? Really? They can't make a mirror-image replica?)

By the way, the toe's original user was a woman in her fifties or sixties--her mummy was dated to between 1069BC and 664BC--so I'm guessing it wasn't a prosthetic to address a battle injury, as many historical prosthetics have been. And maybe the articulated "fake toe" wasn't made primarily to help her walk, but was instead a cosmetic appliance, or helped her do work involving a treadle (if that's not an anachronism) or had some other purpose for her--why assume walking would be the only real use for a prosthesis? The carefully carved toenail wouldn't be there if the device was only for balance and locomotion.

The previous record holder for earliest known prosthesis was the "Capua leg," a copper-and-wood device from about 300 BC. I was in Capua a few weeks ago--but the leg wasn't, it was destroyed in bombing during World War II, while it resided at the Royal College of Surgeons in London. And Herodotus mentions a Persian soldier having a wooden foot after a rather grisly escape in the 5th century BC.

But wait! The "Greville Chester Great Toe" might be even older than the Cairo Toe... oh, the suspense!

[Image above: The Cairo Toe, a dark wooden prosthesis that looks a bit like a big toe and the ball joint behind it, attached to a skeletal foot, with a woven strap nearby. The photo is credited to the University of Manchester, and appeared in the Telegraph article online.]
Posted by Penny L. Richards at 9:56 AM

I suppose the fake beard found on the Egyptian Queen's mummy counts as a prosthetic? Though in her culture, the pharoah MUST have a beard, even when a woman.

As you say, this prosthetic seems to serve a cultural purpose beyond mobility - which the carving itself demonstrates or rather that it was on display - which oddly makes me think of the greek 'surgery' to give Jewish males the appearance of foreskin so they could go to the Greek gyms to wrestle. (now would that be a prosthetic?)