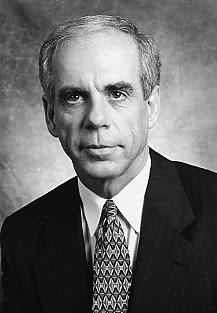 If Chief Justice Roberts doesn't already know former Congressman Tony Coelho (portrait at right), now would be a good time to get acquainted. Coelho was one of the primary authors of the Americans With Disabilities Act. He's now the chairman of the board at the Epilepsy Foundation. And he's one of the best-known people with epilepsy in public life today.

Coelho's story was frequently told during his time in Congress: he had studied for the priesthood, but a medical exam found that he had epilepsy (he didn't know that before, apparently) and that fact barred him from taking his vows. When the diagnosis was reported to the state, he also lost his driver's license and health insurance, both denials standard at the time. He went to work for a Congressman, and later ran for the same seat and won. He rose to the position of House Majority Whip during his six terms in office.

But what if you have a seizure at the White House? he was asked during his first campaign. His response: "Well, in the 13 years I have served in Washington I knew a lot of people who went to the White House and had fits. At least I’d have an excuse." (My response: The White House probably has soft chairs and couches and a first aid kit handy, so what's the problem?)

There's an anecdote in Anne Fadiman's The Spirit Catches You and You Fall Down about Coelho (the Hmong child with epilepsy at the center of the book's story happens to live in Coelho's California district):

Coelho is a popular figure among the Hmong, and a few years ago, some local Hmong men were sufficiently concerned when they learned he suffered from qaug dab peg [the Hmong term for epilepsy] that they volunteered the services of a shaman, a txiv neeb, to perform a ceremony that would retrieve Coelho's errant soul. The Hmong leader to whom they made this proposition politely discouraged them, suspecting that Coelho, who is a Catholic of Portuguese desccent, might not appreciate having chickens, and maybe a pig as well, sacrificed on his behalf. (20-21)

Fadiman goes on to note that epilepsy is considered an especially spiritual condition in Hmong culture, so "what was considered a disqualifying impairment by Coelho's church might have been seen by the Hmong as a sign that he was particularly fit for divine office. Hmong epileptics often become shamans." (21)

[Pedestrian Hostile has good commentary on the coverage of Roberts' seizure.]
Posted by Penny L. Richards at 9:14 PM

Hey! Thanks for the mention and for this informative piece! What's the deal with the Cathoic church not allowing people with epilepsy become priests? Weird.