Memoirist and poet Kenny Fries had an op-ed piece (free registration may be required) in the Washington Post over the weekend, about the recent technical disqualification of runner Oscar Pistorius in a 400m race (he crossed outside his lane, in wet conditions that caused his carbon-fiber "Cheetahs" to slip a bit and slow his time). The applicable governing body has banned any devices involving wheels or springs--but Pistorius's prosthetics involve neither wheels nor springs (um, or maybe that's not quite so*). Oscar Pistorius isn't a great runner because of his Cheetahs; if that were the case, everyone with Cheetahs would be a great runner. So the questions of advantage/disadvantage, technological supports, and athletic achievement are still unfolding. It's been an interesting case to watch, with some parallels to previous stories like Casey Martin's. 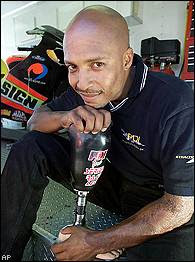 As I've noted here before, NHRA drag racing has a very different history with amputee racers and customized prosthetics. Maybe it's because of the sport's literally explosive nature, or because it's already a technology-centered competition. The legendary Don Garlits lost part of his foot in a 1970 track explosion, and had a permanent limp thereafter; he was still racing decades later. Far from putting Garlits out of the running, the incident spurred him to pioneer major safety changes in dragster design. Reggie Showers (pictured at right, holding a prosthetic leg), a drag-bike racer who was a double below-the-knee amputee after an electrocution accident in his teens, wore specialized prosthetics on race day that made him five inches shorter, in an event where a more compact profile is generally considered an advantage. That advantage was never ruled "unfair," and Showers competed for several seasons without controversy.

(A smaller body is also an advantage in Indy 500 racing, and women Indy drivers have been accused of having an unfair advantage because they're smaller, on average

--a blatantly sexist charge that has not resulted in women (or men of short stature, for that matter) being banned from Indy cockpits.)

*In comments, Sara says the whole Cheetah functions as a spring. So corrected! I wonder if the rules mean that kind of spring action, or the actual boing-boing curly springs I was picturing. Oh, yes, I really was picturing Wile E. Coyote with his spring shoes, bouncing across canyons (see left)--which, as far as I know, nobody's tried to use in track competitions anyway. Good thing the legs are called "Cheetahs" instead of "Coyotes," I guess...

Thanks for the link. I'll go check it out.

The comparisons you raise to racing are well taken as an argument, one I haven't seen raised before on numerous sites with comments on this issue.

Thank you for that interesting insight.
Yours, a rather ignorant person
Best wishes

Actually, the whole Cheetah foot is a spring. That's how that shape works. It replaces the controllable spring of an organic toe-arch-ankle mechanism -- not necessarily more efficiently, however.

Thanks, Sara, I was wondering about that. The Cheetah is clearly flexible and springy in action, but I wasn't sure if it counted as a "spring"--but your description makes sense, I'll modify the text accordingly.