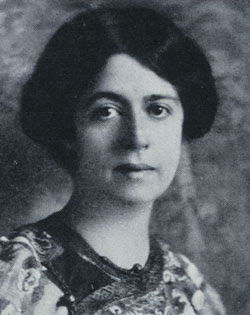 Eunice Tietjens, born on this date in 1884 (and pictured at right, in a head-and-shoulders photo), was a Chicago-based poet and associate editor of the influential magazine Poetry. She also traveled widely, in China, Africa, and the South Pacific. For sixteen months during World War I, she went to be a foreign correspondent in France, for the Chicago Daily News. The experience left her horrified; in her horror, she wrote the following poem:

Song for a Blind Man Who Could Not Go to War

You who have no eyes to see
You were spared what shaketh me.

Houses ribbed against the sky
Where the storm of steel went by;

Children's eyes grown black with fear;
Grief too dead for sound or tear;

Earth with clotted death for yield;
Crows above a battlefield;

Brains like paint spilled on a wall,
And flesh that has no form at all;

And after nights when souls have gone
The lovely, heedless, heartless dawn.

You who have no eyes to see
You were spared what shaketh me.

Tietjens was surely underestimating the way such horrors might be perceived without visual inputs--but it's still a poem that conveys something of the post-WWI sense of appalled weariness and rethinking assumptions. She's been shaken into different thinking about impairment... and about sunrises, too. (Another poem of interest is her "From a Hospital Bed," which begins with the evocative lines, "This is a house of many-fingered pain/Swift fingers, pitiless, that probe and press:/A sullen house, where torture is and stress,/ And where drugged nightmare dreams grow real again.")

Both quoted poems are from Tietjens' Body and Raiment (Knopf, 1919). (Thanks again, Google Books.)