The newest issue of Public Historian came to my mailbox this afternoon, and it's a treat--a special issue on "Disability and the Practice of Public History." Authors in the theme section include (besides myself): Katherine Ott, Steven Noll, Donna F. Ryan, Robert McRuer, Susan Burch, Catherine Kudlick, Sally Stein, and Timothy Crumrin. Topics include oral history, museum accessibility, the politics of the FDR memorial, the AIDS Quilt project, and reviews of exhibits. Lots of illustrations too.
Posted by Penny L. Richards at 9:30 PM 3 comments:

A big welcome for Ragged Edge editor Mary Johnson's entry into the blogging world, Edge-Centric, which debuted just this week and is already a daily must-read for me.
Posted by Penny L. Richards at 4:08 PM 3 comments:

Not here--we've still got a week of summer school to go. But if there are teachers or parents out there shopping for craft supplies and frustrated not to be finding kid-friendly inclusive images, a friend tipped me to Same Differences, a New Jersey-based scrapbooking company (owned by PWD Kim Luty) that makes stickers and such that feature a wider diversity of characters--older folks, people using wheelchairs, a service dog, etc. Here's an example from their site (right; click on it for a closer look). Maybe I'll make a packet of such supplies for first-day-of-school teacher gifts ...along with sending my son in his new Nth Degree "boing" t-shirt, of course.
Posted by Penny L. Richards at 4:27 PM 4 comments:

How Kestrell's spending her summer vacation

Kestrell, aka The Blind Bookworm, has been posting to her LiveJournal about her adventures testing technology this summer. On July 13, she describes testing a multimedia e-book about mathematics being produced by WGBH, and on July 15 she describes a "a wearable haptic braille display" she tested at MIT's Media Lab, which will maybe eventually need a better name, but otherwise sounds cool.

A forum on the film Million Dollar Baby has been published in Disability Studies Quarterly(DSQ), flagship journal of the Society for Disability Studies. Due to special arrangements, this section is available for public access. Although DSQ has recently become a password-protected online journal available only to subscribers and members of the society, the editors have opted to allow open access to the Summer 2005 Million Dollar Baby forum in conjunction with the film’s release on DVD/video. The forum includes commentary from a wide variety of contributors on the film and its relationship to activism, media, and the response of the disability/disability studies community. 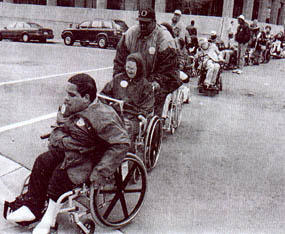 Dear Colleagues, I am interested in your suggestions on how Disability
Studies programs and professionals in design fields might contribute to this
ongoing drive for public awareness and corporate responsibility.

Activists call 'New Urbanism' to account over lack of visitability

Homes in New Urbanism communities are by and large neither livable nor
visitable by people with mobility impairments.

New Urbanists, whose ideas are influencing community design all over the
country, tout walkable communities, decreasing energy waste from suburban
commuters by revitalizing inner cities, and other socially advanced
principles. Proponents repeatedly assert that such home-office-store
communities, because ot their density and proximity to shopping and public
transportation, are excellent for older people who can no longer drive.

The contradiction is that, by and large, the homes constructed in these
"ideal" communities are neither livable nor visitable by people with
mobility impairments -- and not a wise choice for temporarily able-bodied
older people, either. New Urbanists have been the chief designers who,
beginning in the 1980's, brought back the "classic" multi-stepped houses
with front porches high above grade -- houses that are worse for disabled
and older people than the typical house styles of 40's, 50's, 60's, 70's
--this at a time when the aging of the population is a widely reported
trend, and younger disabled people are surviving longer than ever before.

After several years of mainly fruitless advocacy by the Disability Rights
Action Coalition for Housing (known as DRACH) and Concrete Change, a number
of visitability advocates from Georgia and New York expressed their
displeasure by clogging the hall at the 2002 New Urbanist national
conference in New York City, some of us lying on the floor with signs
reading: "Nostalgic Front Stoop. Please step over."

This resulted in a meeting with the board, program participation
opportunities at two following conferences, and through the work of Access
Living in Chicago, a letter of support from the Chicago-based Congress for
the New Urbanism board of directors for the federal Inclusive Home Design
Act legislation.

Visitability advocates in Atlanta worked hard at educating the developers of
the much-ballyhooed projected New Urbanist community, Glenwood Park, for
several years before ground was broken, because it was clear that community
would be held up as a model for years to come.

Besides the balloons, activists handed out house-shaped fans that said,
"Basic Access to Every New Home: One zero-step entrance, 32-inch doors!"

Checking and photographing the houses under construction, Atlanta-area
Concrete Change participants were outraged to see that inaccessibility was
rampant, with steps at every entrance -- in many cases so steep they could
never be retrofitted, let alone visited by a disabled friend -- and narrow
bathroom doors.

The advocates circulated among the crowd, distributing fliers and carrying
balloons that said "Welcome-If Not Disabled" and passing out house-shaped
fans that said, "Basic Access to Every New Home: One zero-step entrance,
32-inch doors!" The strategy was to have a multitude of personal
conversations with the attendees.

By time the formal grand opening program took place, much of the crowd
understood and supported our issue. There was loud applause when a Glenwood
Park developer announced from the stage that, although they had done many
things right in their new development, they had fumbled on visitability. He
pledged to hold a training of their builders.

I will be presenting the training, and advocates will be watching to see
what actually occurs in practice as the next houses go up.

Eleanor Smith is the founder of Concrete Change.

Wright State gets $3 million to help teachers of disabled

Thanks to my father Dr. C. Richard Dorn for drawing my attention to this article from last weekend's Columbus (Ohio) Dispatch.

Doctoral students at Wright State University will be able to concentrate on technology-based methods for teaching disabled students, thanks to a $3 million National Science Foundation grant. A team of more than 20 faculty members will create the concentration during the five- year grant. Research under the program will center on how to create experiences for the disabled that allow them to overcome obstacles in their lives and learning. The new concentration will operate through one of four Ph.D. programs at the Dayton school.
Posted by Mike Dorn at 9:14 AM 3 comments:

Open Call for People With Disabilities and their Stories

Diversity Inc is planning a feature story for the October magazine issue about diversity within the disability community. We're looking for people of color and GLBT individuals with disabilities to talk about their experiences. If you're interested in participating, please send your name, phone number, disability and race, ethnicity and/or sexual orientation via email to editor@diversityinc.com by July 15.
Posted by Mike Dorn at 11:06 AM 3 comments:

Marking the 15th Anniversary of the ADA

How are you celebrating the 15th anniversary of the signing of the ADA in July 1990? We went to one of the many events in the Los Angeles area today--at Kidspace Children's Museum in Pasadena. An all-day schedule of events, from dance troupes to art projects to the Fast Breakin' Lakers (a men's wheelchair basketball team, formerly the Los Angeles Stars), and information booths from community organizations serving families and kids with disabilities. It was too bright outside, but the usual indoor activities at the Playspace were fun too.
Posted by Penny L. Richards at 10:55 PM 4 comments:

A press release from Scholastic today says that, in conjunction with the National Braille Press, they plan to release a Braille edition of the newest Harry Potter book within a week of its July 16 printed text release. This is a big improvement over the lag time of months or even years that many popular novels take in getting a Braille edition, and a sign that someone has noticed how kids' reading culture works--reading an OLD HP book isn't any fun when your friends are all reading the latest. (On the other hand: the Braille edition will be a nine-volume, eleven-pound stack of books, requiring more than a foot of shelf space--hardly backpack material.) For Potter fans who don't read printed text or Braille, there will be an unabridged audio version recorded by volunteers in a marathon session ON July 16; that should be available within the week as well.
Posted by Penny L. Richards at 11:50 AM 3 comments:

On Cliopatria, Jonathan Dresner mentions his wife Anna Dresner's new book for the National Braille Press, guiding blind users through the iPod Shuffle. The Shuffle is the only device in the iPod line that doesn't have a menu screen, which is a good start--but there's still the challenge of navigating the iTunes music store, and using iTunes to get your music onto your iPod. Her next project is about podcasting and blind culture--Jonathan explains some of that too, then goes into a concluding paragraph about the general issue of technological lags as experienced by various segments of society.
Posted by Penny L. Richards at 12:49 AM 3 comments: