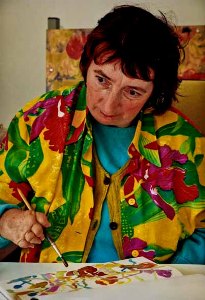 Were there any disabled people? Of course there were! Because there always are. I actually wrote the entry on physically-disabled surgeon Hugh Morriston Davies (1879-1965) after finding a note about him that I'd written here, at DSTU, almost six years ago.  Rev. Daniel Davies (1797-1876) was a blind preacher noted for his erudition; I first found him when the National Library of Wales uploaded some photographs of him to Flickr Commons. Aristocrat Olive Talbot (1842-1894) was an example of a nineteenth-century "invalid"--she rarely left home because her physical issues made it difficult, but she corresponded with interesting friends, and spent her inheritance funding church renovation projects in Wales.

And then there's artist Nerys Johnson (1946-2001) (pictured at left, a middle-aged white woman seated in a colorful smock, holding a paint brush in her right hand.)  Johnson had rheumatoid arthritis from childhood; she was also a painter and a curator in the north of England, noted for her bold works and original exhibit ideas.  And she had a thing or two to say about the disablism of well-meaning admirers.

"I am not an artist because of my disabilities. I am appalled when people see my painting as a hobby, and comment how relaxing it must be. If they just knew how it takes every ounce of energy I've got, every atom of concentration."

When I woke up this morning, Nerys Johnson didn't have a Wikipedia article; now she does. Happy BADD!

Go here to read all the other BADD 2016 contributions.