Sequel to an Obituary 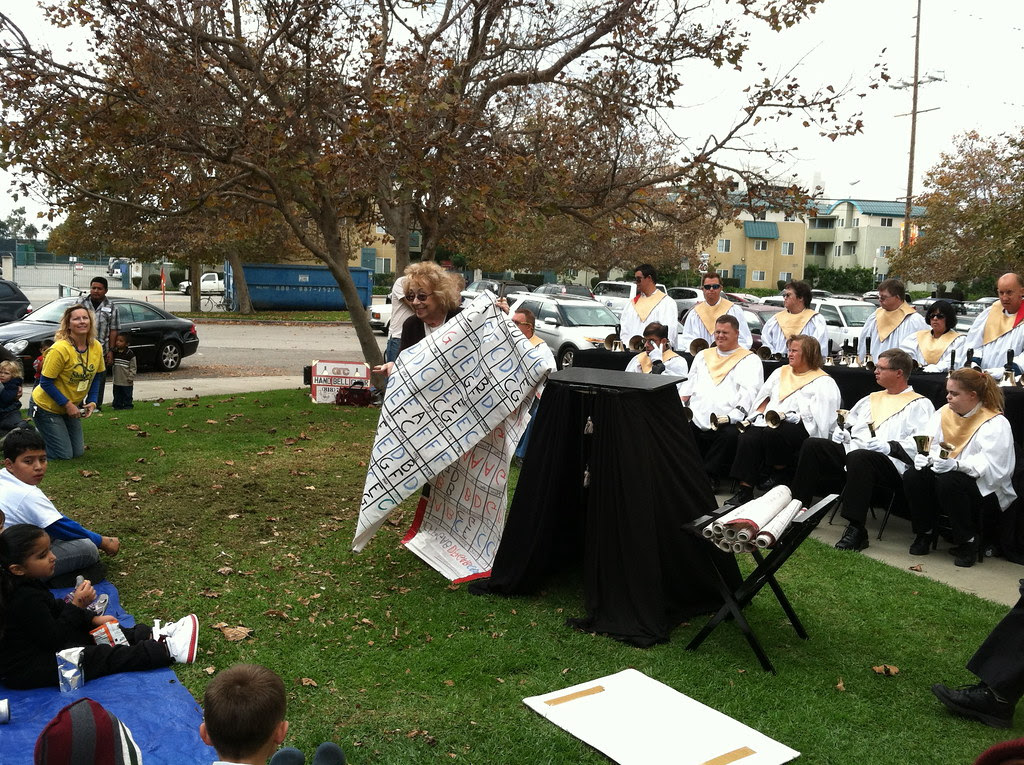 More than five years ago, I wrote about Dixie Henrikson here, after seeing her obituary in the Los Angeles Times. Henrikson (d. 2006) was one of those mid-20th-century mothers of a disabled child who was tireless in founding programs--in her case, social activities for young adults with developmental disabilities. One of her prides was the English-style handbell choir she founded, which performed a lot in Los Angeles.

Well... five years later, I happened upon that handbell choir Mrs. Henrikson founded, as guest performers at a play day in an accessible playground in Westwood. What fascinated me was the adapted score the conductor used (in the image above), which was devised by Dixie Henrikson herself. The choir of adults are not, mostly, able to read music, so the usual format won't work. The conductor told us that she has to transcribe tunes into this system's boxes of letters and colors, and transfer those transcripts to plastic window shades, so they're both large enough for the ringers to see during a performance, and sturdy enough to last through years of use. By demonstrating how the score works, the conductor made the choir not so "tricky"--oh, the audience can say, it's not magic or charm, it's a clever adaptation that supports the players where they are.

Posted by Penny L. Richards at 3:54 PM No comments:

Disabled and Proud at Occupy Oakland

There are plenty of videos on YouTube from the Occupy movement--that's the nature of activism and social media in 2011. But this one from Oakland is particularly good, and it includes the disabled activists who are involved. The disabled activist they interview between 2:00 and 2:30 (her name isn't given) is articulate and prepared, and puts disability in context with the other concerns of the Occupy movement:

Thanks to my friend Kathie for the link. I don't think there's a transcript for this video; I'll transcribe the segment specifically about disability activism below:

Interviewee: "Um, I was moved to come out today because people with disabilities are being so strongly affected by cuts to the state budget, and also nationally, to Medicaid services, and it's just making it impossible to live independently because the cutbacks are so severe."

Disability Blog Carnival #77 is up NOW!

[Visual description: Disability Blog Carnival logo by Ryn, featuring a black-and-white photograph of a man and a boy. The man is in uniform and holding crutches; he is apparently an amputee; the boy is holding onto one of the crutches as a child might hold an adult's hand; the two are photographed from behind, and we see beyond them a seashore and a bridge]

Spaz Girl at Butterfly Dreams was in the midst of some serious tumult recently, but she still hosted a fine edition of the Disability Blog Carnival, with music as the theme. Go have a read, and leave her a comment with your favorite "strong" song--she's collecting them!

The November edition of the carnival is scheduled to appear at Believe in Who You Are, hosted by Martha there. ETA: Here's the call for submissions. Martha writes:

...was there a disabled character from a book or movie, fictional or nonfictional, who inspired you when you first became disabled? Is there someone whom you have met in real life or online who has had an impact on how you view your disability or disabled people in general? It doesn't have to be anything huge; it could be something as simple as before I didn't know I could dance from my wheelchair or this tip helped me save time on my low energy days.
When you submit, I'd like your name or screen name, the name of your blog, and the link to your post. Links are due by November 27.