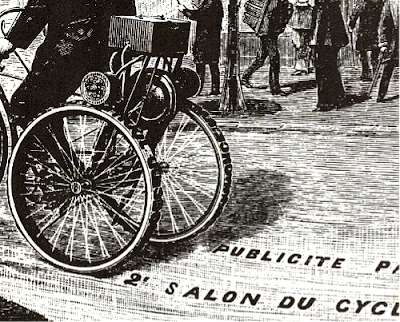 So maybe you're getting the idea of my question. Has anyone ever carved images or words into wheelchair tires, so as to leave a legible or at least artistic trail when the tires are wet (with water, with ink, with paint, etc.)? I don't imagine it would be an everyday thing--wheelchair tires have to be working tires, and these don't look like they'd be very functional or durable in the longterm. But maybe for an occasion? A protest? A celebration? Might need to be a more concise message than an automobile tire's, given the smaller surface. (Note, however, that the two tires in the upper image above have different slogans, to make a longer overall text.) Certainly folks have worn shoes with custom treads for various purposes (here are some flipflops with custom soles, for leaving sand imprints); I'm wondering if anyone has made or used a custom-treaded wheelchair tire, similar to the ideas above.
Posted by Penny L. Richards at 11:56 PM 4 comments:

[visual description: a portrait of composer John Stanley, apparently in middle age, wearing a white powdered wig and a brass-buttoned coat; his eyes are noticeably scarred]

Born on this date 300 years ago today, in London, English composer John Stanley (best click that link before or after Wikipedia goes dark on 18 January). Stanley was blind after a fall in early childhood. The boy turned out to be a musical prodigy while studying with the organist at St. Paul's Cathedral, and, at age 11, was appointed organist at All Hallows Church in Bread Street, a paid position. At fourteen he became organist at St. Andrews in Holborn, and at age 17 he completed a Bachelor of Music degree at Oxford.

Stanley married his copyist's sister, Sarah, a sea captain's daughter. He spent most of his career as organist to the Society of the Inner Temple. Handel was a frequent visitor to the church, to hear Stanley play. The admiration was returned: Stanley directed many Handel oratorios. Stanley's own baroque compositions were many and varied, from an opera to three volumes of organ music. (There are audio files of several Stanley compositions for organ at this site.) He was also elected governor of a Foundling Hospital, which mostly involved his advising the staff on hiring music teachers, and organizing fund-raising concerts.

Stanley's auditory memory and sensitivity were much remarked upon: it was reported that he never forgot a voice, and that he could judge the size of a room by sound. He also, apparently, had an adapted set of playing cards, with tactile markings at the corners, so that he could play whist with guests. Unfortunately for historians of such things, his family auctioned off all his possessions within weeks after he died, including his manuscripts and instruments.

Here's a YouTube video (which is really only a still image of an album cover) of John Stanley's Allegro (V) from Concerto op.2 no.1 in D Major:


I haven't discovered if there are any events marking his 300th birthday, but now we've marked it at DS,TU, anyway. And this early music editor blogger plans to produce some editions of Stanley's concertos this year.

So let me get this straight...

If parents walk into a children's hospital and ask for a highly unconventional series of surgeries to remove healthy tissue and organs, limiting their daughter's growth... a series of surgeries that would never be performed on a nondisabled child... the answer is, fine, because she's developmentally disabled?

BUT, if parents walk into a children's hospital and ask for a very standard surgery to treat an organ that isn't functioning properly, a surgery that will improve their daughter's health and very probably prevent an early death... a surgery that is routinely performed on nondisabled children... the answer is no way, because she's developmentally disabled?

(Wolf-Hirschhorn syndrome is caused by a partial chromosomal deletion--just like my son's (unnamed) diagnosis, only it involves chromosome 4 instead of chromosome 7. Chromosomal anomalies can cause a whole array of anatomical and physiological differences that would complicate a surgery, or make it riskier, and I'd certainly expect those particular complications and risks to be explained to me in the planning stages of a surgery. But that's not why Amelia is being disqualified, according to her mother's story.)

Barriers Bridges and Books has a compilation of links about this story. Stephen Drake is also on the case.
Posted by Penny L. Richards at 11:58 AM 1 comment:

Emma at Writer in a Wheelchair was the first to claim hosting duties for the Disability Blog Carnival in 2012. And now she has the call for submissions for January's edition up:

this year I've decided that a focus word might be a good thing to have along with my goals for the year. And the word I've chosen is Courage.

For the carnival this time round I thought it would be interesting to know what other people's words are.

Have you come up with a word of the year?

What words do you really hate?

Does disability shape your view of language or even individual words?

Those are a few ideas that I came up with for the carnival but I can wait to see what others think of!

Submissions can be left in comments here, tweeted to me @FunkyFairy22 or emailed to ejcrees@googlemail.com if you email please put carnival or similar in the subject so I know it's not spam

The carnival will be on Tues 31st Jan and ideally I would like entries by Sun 29th please.