Go see my son in his "Christmas stockings" over at Gimpy Mumpy (in a photo taken November 2004).
Posted by Penny L. Richards at 4:38 PM 4 comments:

CFP: The Alliance for Excellent Education in D.C.

The Alliance for Excellent Education is seeking proposals for its 2006 breakfast forums in Washington, D.C. These are events where policymakers, educators, researchers, advocates, the media, and others can learn about successful programs and practices in the nation's middle and high schools. Programs and practices in adolescent literacy, individual graduation plans and academic counseling, data-driven decision making, teacher recruitment and retention, performance incentives to improve teaching, and implementing college-preparatory curriculum and bringing struggling high school students to grade level are especially desired. Submit a one-page proposal to kmohr@all4ed.org by January 23, 2006 with the subject line BREAKFAST PROPOSAL. Questions? Contact Jeremy Ayers at jayers@all4ed.org or 202-828-0828.
Posted by Mike Dorn at 3:01 PM 5 comments:

Today is the birthday of American poet John Greenleaf Whittier. His parents were Massachusetts Quaker farmers, and Whittier himself was a lifelong Quaker, active in the abolition movement. Late in life, he lost much of his hearing, and found social demands of his fame most unpleasant:

I am unhappily notorious and cannot hide myself. My deafness makes me confused and uncomfortable when strangers are present. The great and really painful effort I am compelled to make when in company to listen and try to understand, and make fitting replies, and the uncertainty which I feel when I venture to speak, whether I have heard aright, all this affects my nerves, and costs me nights of sleeplessness and days of uneasiness. In fact I am what the Turks call "a cut-off one," so far as society is concerned. I am afraid you did not take into account the certainty that as soon as it is known that I am in your premises, a steady stream of interviewers, autograph-hunters, and people with missions will flow in upon you. It would be like having a waif from Barnum's Museum shut up in your library, and people coming to see what it looks like.

While you're filling in those fresh new 2006 calendars, mark this one down too:

The Women's Studies Seminars at the Huntington Library present:

Women, Disability, and the Arts

So, if you're in the Los Angeles area in late February (and really, there are few better places to be that time of year, climate-wise), come out to the Huntington Library in San Marino for a morning of presentations from three great disability scholars. The event is free-to-the-public, fully accessible, and if you say you read about it here, I'll buy you a coffee. (Offer limited to the first two DS,TU readers to claim it.)
Posted by Penny L. Richards at 8:31 PM 4 comments: 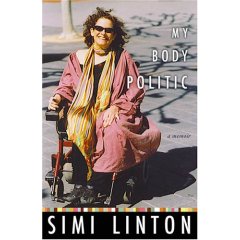 Please mark your calendars and contact the Institute on Disabilities for more information about an exciting mini-course entitled “Reframing Disability through the Arts” that will be taking place on the Temple University Main Campus on March 15, 2006. Drawing on a variety of artistic media including film and memoir, Dr. Simi Linton will explore the shifting meanings of disability in contemporary society and the role those definitions and images play in shaping the lives of people with disabilities.

The presenter holds a Ph.D. from Hunter College and is a leading scholar and proponent for the establishment of Disability Studies programs such as those at Columbia University, Syracuse University and the University of Illinois-Chicago. Simi Linton is President of Disability/Arts consultancy, the author of two important books in the field, Claiming Disability: Knowledge and Identity (New York University Press 1998) and My Body Politic (University of Michigan Press 2006) and co-convener of the University Seminar on Disability Studies at Columbia University. The interactive presentation will last from 9:30 am to 12 noon and will be free of charge except to those who wish to take the course for continuing education credits.

“Reframing Disability Through the Arts” is jointly sponsored by the Institute on Disabilities, the School of Communications and Theater, and the Center for the Humanities at Temple (CHAT).

More of Simi's writings can be found elsewhere on the Disability Studies, Temple University blog: here and here.
Posted by Mike Dorn at 6:29 PM 4 comments: 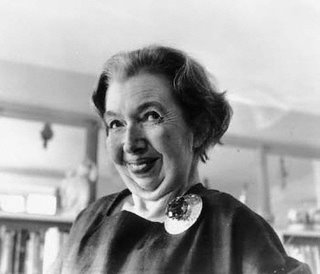 Today (December 14) is the birthday of English writer Rosemary Sutcliff, born this date in 1920 in Surrey. She wrote mostly historical novels for young readers, books about Roman Britain and Arthurian themes. And she wrote a lot of them, with about sixty titles to her name.

Rosemary Sutcliff was diagnosed before the age of three with a form of arthritis, and she used a wheelchair throughout her life. In the 1920s and 1930s, that meant few opportunities to attend school, so her mother read to her at home: Kipling, Beowulf, fairy tales and legends of King Arthur. She showed talent as a painter of miniatures, and her novels reflect the same attention to detail. At least one of her well-known books, Warrior Scarlet (1958), features a physically disabled main character, a boy in Bronze Age Britain born with a "withered arm." A number of Sutcliff's titles are still in print, and older editions can be found on the bookshelves of many schools and libraries.
Posted by Penny L. Richards at 1:52 PM No comments: 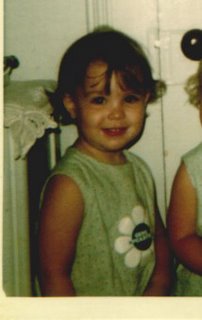 "As long as the differences and diversities of mankind exist, democracy must allow for compromise, for accommodation, and for the recognition of differences."
--Eugene McCarthy

That's me at left, in 1968, wearing a flower-shaped Eugene McCarthy sticker on my dress

What's the disability angle? There are several--maybe readers can point us to others. But here's one: When Eugene McCarthy ran for as an independent candidate for president in 1976, he refused to make his medical records public, citing privacy as the reason, and insisting that the president should be elected "on the basis of his or her record of service, of thought about the issues and programs to deal with them, and not on the basis of any private status such as that of patient." [That link probably requires a subscribing account, but the cite is George J. Annas, "The Health of the President and Presidential Candidates--The Public's Right to Know," New England Journal of Medicine 333(5 October 1995): 945-949.]

Fa-la-la-la-la... 'Tis the season for a disability blogs roundup. And disability bloggers have some great ideas about gifts and travel, but I'll start with Lady Bracknell's sharp take on "special" advice for disabled shoppers. Gimpy Mumpy is FULL of "gimp gear" gift suggestions lately, like a lightweight red fire extinguisher, the Bust Pillow, the Notepaper Roll Holder, and the totally excellent Shopping-Bag Caddy. But she also has a warning for store personnel in this busy season: Don't hand me anything when I enter your store. Teri Adams at Crip Chronicles just went to an equipment expo, and came back with stories of exploitation--so caveat emptor. As an alternative, Ziggi suggests some handmade, low-tech solutions--if you're handy with a sewing machine, powertools, or duct tape.

Traveling this holiday break? Angry Gimp recommends Matching Houses, a service that facilitates vacation house swaps with accessibility as a priority. Darren Hillock cites a newspaper story that says the airlines have a lot to learn in their handling of wheelchairs (and their owners). Someone who knows: I don't believe most of us can match the travel adventures of Windchime Walker in Beirut, but she's been generous enough to write a lot of blog entries about it (with pictures and powerpoint slideshows, too). "I was in the WC when the announcement came through that we were returning for security reasons--there was an electric wheelchair on board that had not been properly gone over by security. I knew it must be mine. And it was." It's not just chair users who encounter strangeness at the airports; Gimpy Mumpy passes along the warning, "If you have an artificial leg, be prepared for it to be X-rayed separately." (And speaking of inspecting prosthetic legs....) Maybe that's another reason Maz is taking a cruise instead? If you're planning a trip to Chile, Scott Rains suggests the new wheelchair-accessible, multisensory, Braille-labeled nature trail at Lago Penuelas National Park. And don't forget to tip well in your travels.

It couldn't happen today...or could it? Several blogs have caught the story of troubling loopholes in the proposed new EPA guidelines for testing pesticides. Maybe tomorrow: Evan Brustein at Beyond the Ramp wonders, what will happen to high-level competition rules and records when top athletes with prostheses can outperform top able-bodied athletes? (I grew up in a sport--drag racing--where technology was always visibly integrated into, even central to, the competition--maybe that's a model to consider.) Still on the near-future, Mary Johnson applauds the NYTimes story titled The Problem with an Almost-Perfect Genetic World. Ending this glimpse of the near-future on a bright note, Ziggi at Wheelchair Diffusion has assembled some great photos of kids in chairs, playing sports.

Language stuff, as usual: The Ouch! blog reports on a British poll that looks at offensive terms used on television (not for the squeamish, they say). "Crip" isn't "cripple," Mary Johnson explains, but it's still a complicated term, depending on who's using it and to whom they're referring. In a related matter, Shawn at Along the Spectrum had a nice series of entries in November called "Full Disclosure"--bottom line being, in the case of autism, "There’s a lot to gain from full disclosure and anything else has potential for harm."

News from the North Pole--well, or that direction, anyway--the CBC's website has a monthly column called "Disability Matters," with three disabled writers contributing thoughtful essays--check it out. The most recent entry is Helena Katz's commentary on discrimination against blind job applicants. And Marvin of the Laurent Company had a fine trip to Finland in November.

Finally, stocking stuffers from the world of books, music, and movies: David Faucheux recommends The Speed of Dark by Elizabeth Moon; Michael and Jamie Berube liked the film version of Harry Potter and the Goblet of Fire. Check out Blogging Bookworms for a rich and varied array of disability-conscious book discussions, including recent entries about Thurber's My Life and Hard Times, William Horwood's Skallagrigg, and H. G. Wells' The Country of the Blind. A South Park DVD is perfect for the Timmy fan in your life (and there are a surprising number of us, it turns out). Angry Gimp is listening to Sigur Ros. And if you get an mp3 player for a gift this season, check out the Blobcast, where David N. Wallace is doing disability commentary as a podcast (the highlight is his mash-up of tech podcaster Cameron Reilly's "rant" with "Winter in Melbourne," on Blobcast #3). Gimpy Mumpy suggests Child's Play as a cool donation opportunity in this season of giving--and if you've spent much time hanging around a children's hospital, you'll see her point.

Happy New Year! Next disability blogs roundup will post in early January 2006. Tips are always welcome, just drop me a note in the comments or at my email address.
Posted by Penny L. Richards at 4:29 PM 5 comments: