"Crazy Bet" and her 19c sisters 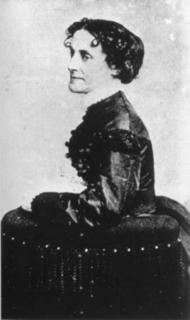 Reading fiction and researching fact this week has kept me thinking about how easy it has been in the past for women to slip into the category of "madwomen"--either intentionally, or at the convenience of others.

First, the factual case: Elizabeth "Crazy Bet" Van Lew (1818-1900, pictured at left), lifelong Richmond VA resident, was also a Quaker-educated abolitionist who convinced her mother to free their family's slaves in the 1850s. By the time the Civil War started, Elizabeth was a spinster in her forties, and her politics had already made her seem odd. It didn't take much to nudge her own reputation into the "madwoman" zone--she just dressed shabbily, kept her hair messy, and muttered to herself, enough that she was seen as a harmless wretch. Thus, she managed to maintain an amazing network of informants and message-passing, enough that Ulysses S. Grant considered her an invaluable source of wartime intelligence. After the war she was intensely disliked and impoverished (she spent her family's fortune during the war, in part for bribing wardens and such), but was given the government job of Postmistress of Richmond in recognition of her service; when she died, grateful Bostonians erected a memorial over her Richmond grave.

But the more usual story we find is the sadder case: I just read Jean Rhys's Wide Sargasso Sea (1966), in which two women are accused of madness, or driven to it, or both. A mother's disabled child dies after injuries sustained in a fire--and her frantic despair is enough to call her mad, and lock her away forever. Her daughter is accused of madness by association, because a fortune-seeking husband wants her out of the way. The unnamed husband is meant to be the Rochester character in Jane Eyre; the wife, the archetypal "Madwoman in the Attic" in the same novel. Rhys took on the challenge of filling out Bertha Mason's back story, to brilliant effect. The women are friendless, in the sense of having no one with any power who can help them. They have husbands, but the husbands are part of the effort to see madness in every quirk.

The husband problem reminded me of Elizabeth Packard, the midwestern minister's wife who was institutionalized in the 1860s because she didn't want to attend church with her mate. When she got out (after three years), she worked for reforms in state asylums, including the freedom of inmates to receive and send mail, and stricter standards for certifying insanity, especially in the case of married women. In 1864, in Illinois, only her husband's word and one doctor's testimony were necessary to put her away.

It was so, so easy to see a woman as a madwoman in the 19th century, especially if the beholder needed her to be mad. Elizabeth Van Lew found a way to use this thin line to her advantage; Elizabeth Packard worked to protect the women who might too easily be pushed over that line by their husbands.

Myra Himelhoch and A. H. Shaffer, "Elizabeth Packard: Nineteenth-Century Crusader for the Rights of Mental Patients," Journal of American Studies 13 (3)(1979): 343-375.