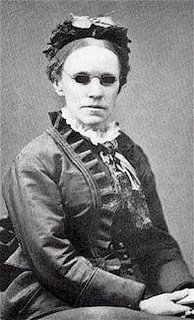 It seemed intended by the blessed providence of God that I should be blind all my life, and I thank him for the dispensation. If perfect earthly sight were offered me tomorrow I would not accept it. I might not have sung hymns to the praise of God if I had been distracted by the beautiful and interesting things about me.
Prolific American hymn writer Fanny Crosby was born on 24 March 1820, on a farm in Putnam County, New York. Her blindness was attributed to an illness in infancy. She is said to have written over 8000 hymns, many of them published under pseudonyms both masculine and feminine. Highly sentimental verses by Crosby, with titles like "The Blind Girl's Lament" (1842), appeared in the annual reports of the New York Institute for the Blind, where she began as a student at age 15 and stayed for thirty-five years, as a teacher of rhetoric and history. In 1858, she resigned her teaching position because she had married Alexander Van Alstyne, a fellow NYIB alumnus and church-music composer. In 1885, she played one of her own compositions at the funeral of President Ulysses S. Grant. Fanny Crosby died shortly before her 95th birthday, in 1915.

The complete text of her 1906 autobiography, Memories of Eighty Years, is available online at the Disability History Museum.

Edith L. Blumhofer, Her Heart Can See: The Life and Hymns of Fanny J. Crosby (William B Eerdmans Publishing Co., 2005).