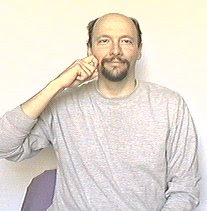 A colleague asked about information about teaching an introduction to sign languages within a larger course so I put together this outline of a lesson plan and some resources for people to explore the issue further. The version below has live links but see http://linganth.blogspot.com for a version with the links spelled out.

A ONE DAY INTRODUCTION TO SIGN LANGUAGE AND DEAF CULTURE

When I teach one class on sign language, I try to introduce pieces of the phonology, grammar and general cultural aspects.

Language is made up of smaller units (for example the unvoiced p vs. voiced b in English /pit/ vs. /bit/). The pieces in sign language differ but as with spoken languages words are created by layering kinds of pieces together—handshape, placement and orientation are some of the basic pieces.

(Video examples of all words in capital letters can be found at
the ASL browser.)

APPLE is signed by a twisting knuckle in the cheek

The ASL word GIVE implies a giver and a receiver: (I)GIVE(you)

Would translate in Signed English to

I GIVE TO YOU

something that makes no sense in ASL because it becomes I (I)GIVE(you) TO YOU.


You can also inflect verbs like GIVE in various ways.

When you discuss people in ASL, they are given specific spaces in the “signing space” you use, the plane in front of you where your hands move. If you set up that you are in a room with two people or just mention two people and give them metaphorical spaces, you can indicate who you are giving to (or that they are giving to each other) by where you start or finish the sign. If you have Jane on the left and Conor on the right, you can indicate that Jane is giving Conor something by moving one hand in a GIVE handshape from the Jane position to the Conor position.

You can inflect GIVE and some other verbs in a number of other ways as well. You can change it to indicate that you are giving to a number of people by using a one handed version of the GIVE but move it repeatedly towards different spots in the plane in front of you.

Change it to indicate you are giving it to everybody or a large audience by moving the one-handed version of GIVE in a large, smooth arc, done left to right if you are signing with your right hand.

Signed languages around the world have often been banned because they weren’t thought of as proper languages.

Deaf people were often taught by “oral methods” where they were expected to lip read and learn to speak despite not being able to hear what was being said. While some students, especially those who went deaf later in life, can learn to lip read fluently, it is a very difficult way to get information and sometimes impossible for those born deaf. Only 40% of spoken English can be perceived on lips.

One reason Deaf people fight cochlear implants is that they don’t see them as the cure that many medical authorities claim they are and see them as another form of oralism.

The first American school for deaf children was started in 1817 by Thomas Gallaudet and Laurent Clerc. Thomas Gallaudet was a hearing American clergyman who was sent to Europe to learn how to teach deaf children. He first went to England where he was told he could be taught an oral method if he stayed 10 years and swore himself to secrecy. He then met the head of the French school, which taught in sign language, and was told it would take a year and he could tell anyone he wanted. He took the offer, went to France and a year later sailed back with Laurent Clerc, a Deaf man who was the star pupil of the Paris Institute. On the long boat ride back, Gallaudet practiced his French Sign Language with Clerc and Clerc learned written English. Together they convinced the Connecticut State Legislature to give them money to start their school. They taught in sign language adapted from French Sign Language and the home signs students brought into the school.

Clerc went on to found dozens of schools around the country.

Starting in 1880, international sentiment moved against sign languages and most countries went to oral teaching methods. Deaf organizations such as the U.S. organization the National Association of the Deaf, also started in 1880, fought against this.

Gallaudet University founded 1864 in Washington D.C., has always taught in sign language and is in many ways the center of American Deaf culture.

It wasn’t until the 1960s that William Stokoe, a professor of English at what was then Gallaudet College gave a modern linguistic description of American Sign Language . This gave sign language a legitimacy it did have before.

The 1987 “Deaf Pres Now” protests at Gallaudet University were seen as a turning point because the Deaf students demanded that their culture and language should be taken seriously.

See Monaghan, Schmaling, Nakamura and Turner's Many Ways to be Deaf for more information on this, including much much more non-US information

ASL University has an introduction to sign language with lots of nice still pictures.


A sampling of printed resources:


My latest book,
Interpersonal Communication, has the Key Terms piece, a brief excerpt from LeMaster & Monaghan and a piece on Deaf churches:


If you would like more a linguistically oriented introductions to sign language, Clayton Valli and Ceil Lucas's Linguistics of American Sign Language is a clear introduction to general issues in ASL and sign language grammar which comes with a DVD that should be really useful--I've never seen it but Clayton Valli was a master poet and linguist.


Klima and Bellugi's Signs of Language remains a classic overview on how the linguistics of sign languages in general work:


As a lot of these books are expensive, you might want to see if your library has them before you buy.
Posted by Leila Monaghan at 8:45 AM

Is there anyone who needs a hearing/service dog? This pup is in a shelter. Here's a copy of the e-mail I received and I agreed to pass on info Please forward the announcement.

This dog is a Katrina survivor and is an owner surrender. that has
been checked out. This dog knows sign language and should go to some
one who needs a hearing dog. He is far too big for Fay she only
weights about a 100 lbs. I did talk to her about him she still wants her Hunter. I thought maybe you would know some one or a group the could place this dog with someone who could really use him.

Thanks for your help.

I like your blog. Thank you. They are really great . Ermunterung ++ .
Some new style Puma Speed is in fashion this year.
chaussure puma is Puma shoes in french . Many Franzose like seach “chaussure sport"by the internet when they need buy the Puma Shoes Or nike max shoes. The information age is really convenient .

Now days theres some kind of Medicine no Prescription to treat deaf persons and improve their life quality.