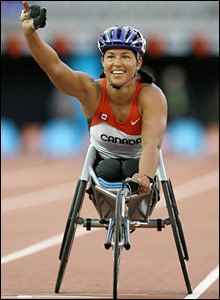 Today is the 37th birthday of Canadian athlete Chantal Petitclerc, born on this date in 1969 in Saint-Marc-des-Carrières, Quebec. She had a spinal cord injury in an accident when she was 13. In high school, a coach encouraged her to swim for upper-body strength and overall stamina; at 18, she discovered wheelchair racing, and it turned out that she would become very, very good at that sport: she holds sixteen medals from four Paralympic Games (Barcelona 1992, Atlanta 1996, Sydney 2000, and Athens 2004)--including five gold medals at the 2004 Games. She's also been on the Canadian team for the Commonwealth Games in 2002 and 2006, and the Canadian record holder in five events. And she's been the spokeswoman for Defi Sportif, a Canadian organization for athletes with disabilities.

Petitclerc caused a bit of scandal in 2004, when she turned down a trophy from Athletics Canada--it's awarded each year to the track-and-field athlete of the year. Petitclerc was to be co-winner with Perdita Felicien, a hurdler who had a disappointing performance in the Athens Olympics that year. Petitclerc considered the co-winner status to be patronizing. "To me, it's really a symptom that they can't evaluate the value of a Paralympic medal - that it's easier to win a Paralympic medal than an Olympic medal," she explained. "That may have been true 15 years ago. That's not the case any more."

In 2005 Petitclerc was named Canada's female athlete of the year, as well as the Laureus Award, given by sports journalists around the world to the disabled athlete of the year. That same year, she was inducted into the Terry Fox Hall of Fame.
Posted by Penny L. Richards at 12:56 PM