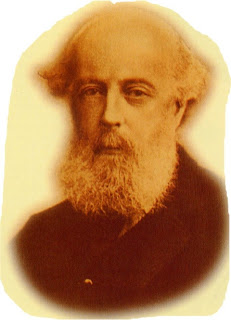 The very defect of sight, which proved an insuperable obstacle in the career which I had chalked out for myself, has peculiarly fitted me for a new and more extended sphere of usefulness.

Today marks the birthday of British doctor Thomas Rhodes Armitage, born on this date in 1824. He is best remembered as founder of the Royal National Institute of the Blind (RNIB). Armitage trained as a doctor, and worked in medicine for years, including a stint in Turkey during the Crimean War. He married in 1860 and had two sons and a daughter.

Armitage (shown above left, in a sepia-toned portrait found here) left his medical practice in 1866, when he could no longer see well enough to read printed text. From then, he became interested in the various possible systems of raised type. As founder of the "British and Foreign Society for Improving the Embossed Literature of the Blind," he was among those who popularized Louis Braille's six-dot system as the standard for producing literature for blind readers. Armitage was also concerned with employment for young blind men, and promoted vocational training in such fields as piano tuning to improve their chances of finding work. He raised funds to open the Royal Normal College for the Blind in 1872. His books included The Education and Employment of the Blind (1871, 1886) and The Condition of the Blind in Great Britain and Ireland (1878).
Posted by Penny L. Richards at 12:55 PM