While Strolling through the Park One Day... 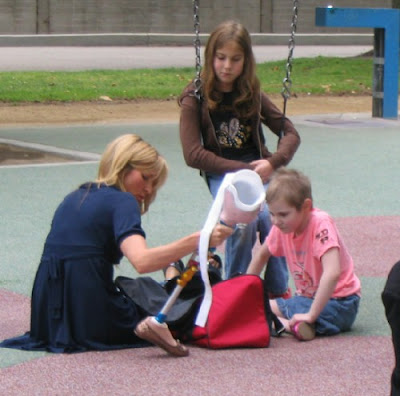 Okay, I can't pretend it was a surprise, so the song ends there. But I did take this photo today in the park--at Aidan's Place, an accessible playground near UCLA. It's Heather Mills showing a prosthetic leg to a little girl named Sammy, who recently had an amputation, while Sammy's older sister looks on from a swing. Today is Sammy's eighth birthday. (What you can't see is the film crew from Entertainment Tonight, and the very long white limo that was waiting a few feet away.) We were there because Shane's Inspiration, an organization that builds accessible playgrounds here in Southern California, asked some of the park regulars to be there during Mills' visit, even though it was a Monday morning--going to school or playing in the park? Not a difficult call, really. So we knew there'd be some hoopla, and cake, but it was such an "only in LA" bizarro family outing, we couldn't resist. (I think the story will be on ET Tuesday night--I doubt we're actually in any of the footage, but if we are, I'm the mom in the black hat.)
Posted by Penny L. Richards at 4:58 PM

hahaha -- Yeah, if there isn't a camera and an at least D-list celebrity, it isn't really happening. That is indeed L.A. One layer, of L.A., anyway. Okay, so it's the most visible layer. But that's kind of the point.