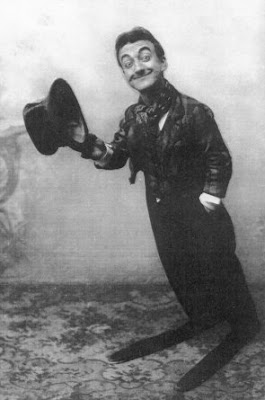 On a day when much of the blogging world is reading the last installment of the Harry Potter series, a post about another English Harry:

Music-hall entertainer Harry Relph (shown at left, in a publicity pose), known as "Little Tich," was born on this date 140 years ago, in the present-day London borough of Bromley. He was the sixteenth of his father's children, and was born with six digits on each hand and foot; his short stature would become apparent later. Relph's adult height was four feet, six inches.

As a boy, Harry Relph was a barber's assistant, and began performing locally, dancing and playing a tin whistle. He also did blackface acts, early in his career, but eventually found a more unique performance of his own--dancing with large custom "flaps," or elongated shoes (about 28 inches long). His shoes countered his weight, allowing him to bend full over in any direction without falling; he could also balance on the tips of his flaps, lifting himself to a precarious height.

Relph was hugely popular: his frequent appearances in Paris got him elected to the Academie Francaise, and his act was mentioned in anecdotes about World War I English servicemen and skiing. In addition to his "Big Boots" dance, he also performed in drag, and sang. Because of the timing, nature, and popularity of his act, Relph's Big Boots dance is preserved in silent film--and viewable on YouTube, of course (see below for embedded footage). The word "titch" survives in some places as a colloquial term for a little person, after this Tich.