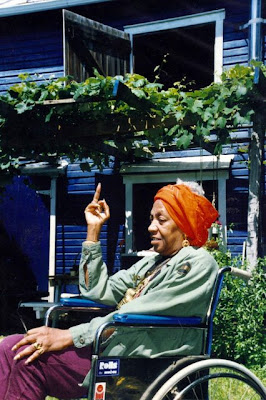 [Image description: older woman in a wheelchair, wearing a bright-orange head wrap, in front of a blue house and green bower, with her middle finger raised; found here.]

"I'm just a loud-mouthed middle-aged colored lady with a fused spine and three feet of intestines missing and a lot of people think I'm crazy. Maybe you do too, but I never stop to wonder why I'm not like other people. The mystery to me is why more people aren't like me."

Florynce Kennedy was born on this date in 1916, in Kansas City, Missouri. One of the first African-American women to graduate from Columbia Law School, Kennedy went on to help found the National Organization of Women, the Feminist Party, the Women's Political Caucus, and the National Black Feminist Organization.

She used a wheelchair for many years, after several strokes and two heart attacks.
Posted by Penny L. Richards at 12:15 PM