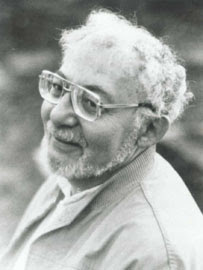 There is no way in the world I could ever take revenge on the disease that has disabled me. It just seems to me that disease, because it flirts with death, is a rather important subject to write about.

American writer Stanley Elkin was born on this date in 1930, in New York City. Elkin was a professor of English at Washington University in St. Louis. In 1972, he was diagnosed with multiple sclerosis (MS); from the mid-1970s, he used a wheelchair or a walker.

Elkin's experience as a disabled person was reflected in his critically-acclaimed fiction, which had long tended towards dark comic observations, inventive language, and complicated plots centered on deeply flawed characters. Ben Flesh, the main character in The Franchiser (1976), has MS too; in Magic Kingdom (1985), the plot follows a group of terminally ill children who are treated to a Disney World vacation by a wish-granting charity. The children resent being made into pitiful spectacles by the charity's publicity, and wish only to be left alone together to share as peers. The novella "Her Sense of Timing" (1993) is about Professor Schiff, a political geographer with MS, who uses a wheelchair, and must prepare and host a party without the expected help of his wife. In 1993, Harper's Magazine published "Out of One's Tree: My Bout with Temporary Insanity," in which Elkin describes a two-week, prednisone-induced psychosis he experienced from prescription medication for his MS.

Stanley Elkin died in 1995, from complications following heart surgery. His papers are at Washington University in St. Louis.
Posted by Penny L. Richards at 11:09 AM