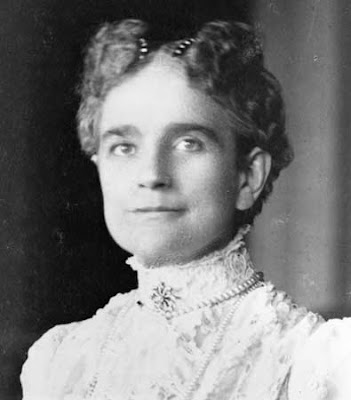 [Image description: head-and-shoulders photograph in black-and-white, of a woman with an elaborate jeweled hairstyle and high-necked lacy dress or blouse]

Every election cycle, Americans are treated to another round of speculation about "the role of the First Lady," complete with the kind of questions reporters ought to be ashamed to ask about any woman in public life: should she have a job? what will she wear? do we like her hair, or does she need a makeover? It's tedious and worse, to see the spouses of candidates forced to chat about cookie recipes and "good causes." So, while I write here about a past First Lady, be assured that I don't ordinarily find them too interesting. (Except Lou Henry Hoover--a geologist who translated a 16c. Latin metallurgy text, and lived overseas much of her adult life.)

Ida McKinley (born on this date in 1847; portrait above right) was disabled throughout her adulthood--she had epilepsy, and intense headaches, and phlebitis that made it difficult for her to walk. She was probably overmedicated with sedatives. And she had a rough time emotionally--both her daughters died young in the 1870s, and in 1898 her only brother was murdered by his mistress, with an ensuing sensational trial.

A discreet press was mostly silent about her "fainting spells," and "a special campaign biography" of her was released to frame her health in the most gentle terms. Reporters, forbidden to write about her health, instead focused on her gowns. Her husband, President William McKinley, was devoted to Ida's care: like many partners, he could see the subtle signs of an impending seizure, and knew how to cover for her during required periods of rest. And that devotion became part of his public reputation. Even her absence on the campaign trail was seen as helpful--a gap that reminded voters of the candidate's tender personal life. Her "frailty" was held up as ladylike and unthreatening, in contrast to Mary Baird, Mrs. William Jennings Bryan, the trained lawyer and reform-minded woman who was rumored to write her husband's fiery speeches. (McKinley defeated Bryan in the 1896 and 1900 elections.)

Privately, some in Washington read Ida McKinley as a manipulative "invalid," using her perceived delicacy to demand indulgences (think of Zeena in Ethan Frome for a well-known literary version of this archetype). She would appear at state events propped in a velvet chair, with the understanding that she would neither rise from her seat nor shake hands. She wore luxurious lacy gowns and jewels, to enhance her persona as a fragile beauty. (She was the first First Lady to appear in newsreels, so she had a much wider audience for her fashion choices than previous First Ladies). Ida McKinley crocheted a lot--a fine sickbed tradition; while in the White House she reportedly made 3500 pairs of slippers to raise money for charities. There's some evidence that she was sedated not only for medical necessity but to control her "irrational" personality.

Unfortunately, we have little of Ida's own writing to know her experience at the center of all this rumor and spin: her early correspondence with William was burned in a warehouse fire, and the couple used the telephone a great deal in later years. Ida Saxton McKinley didn't write an autobiography, or give any in-depth interviews. And she had no surviving children to recall her.

When William was assassinated in 1901, among his last words were concerns about how Ida would learn the news: "My wife--be careful, Cortelyou, how you tell her--oh, be careful." Ida was a widow for six years, living with her sister in their hometown of Canton, Ohio. Her childhood home is now a restored historic site in that town.

Thanks for writing this about Mrs. McKinley---she is representative of the experience of many persons with E. whose families are reluctant to give a nod to their conditions.

I would have loved to talk with her...
Paula Apodaca
http://www.epilepsy-paula.blogspot.com