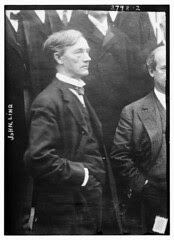 John Lind (LOC)
Originally uploaded by The Library of Congress

Photo above is from today's Library of Congress uploads to Flickr. John Lind (1854-1930) was a teacher and lawyer, the 14th governor of Minnesota, a US Representative, and President Wilson's envoy on Mexican affairs. You can't tell from this photo, but he was also noted for being an amputee--his lower left arm was lost in a sawmill accident when he was thirteen.

Because he was such a public figure, it's not difficult to find contemporary references to Lind's impairment. Many of them add the lost limb to a heroic narrative:

"His quiet and collected personality, made more heroic by the loss of his left arm, impresses one with immediate confidence and respect." (The American-Scandinavian Review (January 1913): 15.)

"Soon afterward he began work in a sawmill, in which he lost his left hand by an accident. This was probably not altogether a misfortune; for it compelled an immediate abandonment of manual labor for intellectual pursuits and thus directed his destiny to higher spheres of action." (Algot Strand, ed., A History of The Swedish-Americans of Minnesota (1910): 73)

But Lind was a politician, not a saint, and some other references make that clear. "For a one-armed man John Lind can make some telling blows once in a while," reported the Moose Lake Star on 17 January 1901, and they weren't being metaphorical. Fresh from his term as Governor, Lind walked into a newspaper office and attacked an editor who had long criticized him.

[posted on the occasion of a certain Minnesota-based blogger's birthday]
Posted by Penny L. Richards at 12:44 PM

For anyone looking to support an amputee please take a look at this video of Charles: http://www.ahamoment.com/pg/voting?id=8269

his story about overcoming his loss and charging into life has become a finalist in the mutual of omaha, aha moment campaign. if enough people vote for him in the next two weeks he'll be featured in the 2010 ad campaign and give a nice story a boost on the national stage.

take a look and vote if you like please.