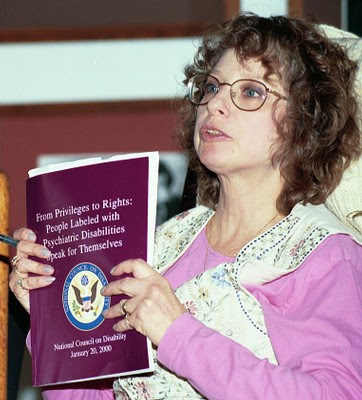 [visual description: photograph of Judi Chamberlin, holding a book titled "From Privileges to Rights: People Labeled with Psychiatric Disabilities Speak for Themselves" from the National Council on Disability.]

"Lots of times you read an article about disabilities and have someone with cerebral palsy speaking about cerebral palsy or somebody blind talking about being blind, and then you have a family member talking about what it's like to be mentally ill and the interviewer seem to think that's the same thing, but it's not."

Psychiatric survivor activist Judi Chamberlin has died, according to a note posted on her blog, which documented her months with hospice care.
Posted by Penny L. Richards at 10:42 AM

Thanks for sharing this story with our readers. I have been delinquent in memorializing two of my Philadelphia friends who passed away last year, but hope to get to it the first week of February. Mike