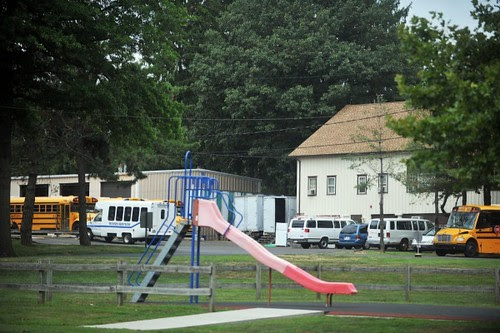 Buildings line the street inside to Woods Services campus in Langhorne, PA., originally uploaded by Edu-Tourist.

Pennsylvania-based Woods Services is 100 miles from Long Island but it is one of nearly 20 residential facilities where Nassau and Suffolk send their children, men and women with emotional problems or developmental disabilities - mainly because not enough suitable beds exist in New York State.

The counties' departments of social services have adults and children spread among about 20 facilities in nearby states. Woods serves 830 children and adults alone hailing from 20 states, said Woods spokeswoman Cheryl Kauffman.

Nassau and Suffolk officials say that they try to place their charges in locations that are close to home, but the shortage of beds and appropriate expertise in New York makes it all but impossible.

"It should also be noted that there is a scarcity in New York State of the types of residential programs required for those children afflicted with developmental disabilities and severe emotional, cognitive and behavioral problems," said Karen Garber, a spokeswoman for Nassau's Department of Social Services. "Regretfully, often times the only placements available for such children are located out of state."

Nassau and Suffolk officials said they verify whether a facility has a license and clean safety record before placing children or adults there. They also try to place people in the "least restrictive environment" that also fulfills the client's needs.