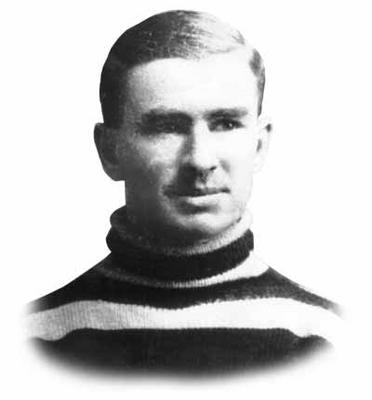 When I was a kid, I read the dictionary for fun (sad maybe, but true). Now, I get some of the same kick from biographical dictionaries. I've been trolling through the very searchable Dictionary of Canadian Biography Online for disability history stories to add to the Disability History Dateline. Mostly, you'll find asylum administrators, 19c. figures in deaf education, and nuns who started homes for "the aged and infirm." But every once in a while, there's someone more offbeat.

"One-Eyed" Frank McGee (b. 1882) was a hockey player, and a good one--he led the Ottawa Silver Seven to three consecutive Stanley Cup championships, 1903, 1904, and 1905. In one 1905 game, he scored a fourteen goals, a record that still stands. Then he retired, in 1907. McGee had lost an eye as a teenager (in a hockey accident), and was thinking maybe he'd get out of the violent sport that could put the remaining eye at risk. But that cautious approach seems to have been short-lived, because in 1915 he enlisted in the Canadian Army to fight in World War I. Family legend says he tricked the examiner to get a passing vision test; but a look at the form itself shows the examiner left the crucial space blank--so maybe he noticed McGee's partial blindness and just decided not to record it. Anyway, McGee was injured in battle, and unfit for duty for seven months, but he insisted on returning to combat duty after recovering. He was killed in France in September 1916, during the Somme offensive. In 1945, he was in the first class of inductees to the Hockey Hall of Fame.
Posted by Penny L. Richards at 11:34 AM

Hey thanks, now the image is there!

Happy to be of assistance. Just drop me a line, and we can figure it out. Mike