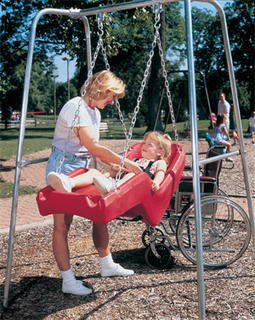 It's hard to know exactly what's up in this ugly story, but I'm suspecting it's a junior version of the "people with placards hog all the good wide parking places," or even closer, "why should that woman in the wheelchair get to use the nice big stall in the ladies' room?" For readers unfamiliar with accessible playground equipment, the Jenn Swing is pictured here. It's true that accessible playgrounds are often the most popular playgrounds around --in Los Angeles, the 2-acre Shane's Inspiration space at Griffith Park is counted as the single most popular playground in the city, for example. They're often the newest, safest, most creative parks available. But where two ten-year-old boys can threaten the mother of a three-year-old for "hogging" a therapeutic swing (when other swings are empty), and the nannies nearby are on the boys' side, that's a park that I'd avoid for reasons other than inaccessibility. It's not enough to build these playgrounds--there has to be some community education to make them function as they should. Or, in the case of the West 70th St. park, a whole LOT of community education.
Posted by Penny L. Richards at 2:19 PM