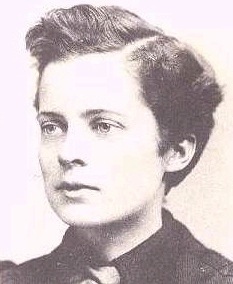 Edith Lanchester (right) was born on this date in 1871, daughter of a prosperous English architect. When she was 24, living in Battersea, working as a secretary, she announced that she intended to live with her lover, Irish factory worker James Sullivan, without marrying him, as a feminist protest against marriage itself. In response, her father hired a "mental specialist" to interview Edith; he determined that she was threatening suicide--in the form of "social suicide"--and so he signed emergency commitment papers, under the Lunacy Act of 1890. Edith's own father and brothers bound her wrists and dragged her into a carriage that would deliver her to the Priory, an institution at Roehampton.

Edith Lanchester's socialist connections spread the word--within days, newspapers around the world carried news of the "Lanchester Kidnapping Case." The New York Times carried headlines like "Imprisonment in London Insane Asylum: Sullivan's Habeas Corpus Proceedings" (3 November 1895) and "Marriage --Without Ceremony: English Girl (Lanchester) Declared Insane" (also 3 November 1895). Four days after her commitment, Edith was released. The examining doctors this time declared her "misguided," but not insane. Upon her release, she and Sullivan resumed their intended domestic arrangements, raised their two children, and lived together until his death in 1945.

(If her name sounds familiar but her story doesn't, you may be thinking of her daughter: actress Elsa Lanchester, who played the Bride of Frankenstein and married Charles Laughton.)
Posted by Penny L. Richards at 7:54 PM

This post was really useful to me ^^ Thanks for putting it out there. It's really interesting. Oh the injustice !! Anyway. Yes, thanks!