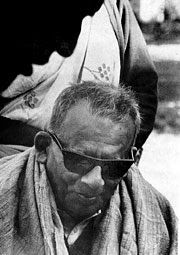 Born on this date in 1904, in Behala, Kolkata, Indian painter and muralist Benode Behari Mukherjee. (Photo at left shows the artist in sunglasses; his name is also sometimes spelled "Binode Bihari.") He lost the sight in one eye at age 13; and in the other eye at age 54, in an unsuccessful cataract operation. As a young artist, he spent time in Japan, and learned Japanese watercolor and calligraphic styles that show in his later work. As an art instructor, he was part of the teaching faculty at Shantiniketan, except during the 1949-1952 years when he was curator at the Nepal Government Museum in Kathmandu. He wrote an award-winning memoir about being a blind artist, Chitrakar. In 1972, director Satyajit Ray (a former student) made a short documentary film about Mukherjee, titled Inner Eye. The artist's daughter, Mrinalini Mukherjee, is also an artist.

This week is the final week of a major retrospective of Benodi Behari Mukherjee's work at the National Gallery of Modern Art in New Delhi.
Print sources for further reading:

Nemai Ghosh, Ray and the Blind Painter: An Odyssey into the Inner Eye (Kolkata: New Age 2004).