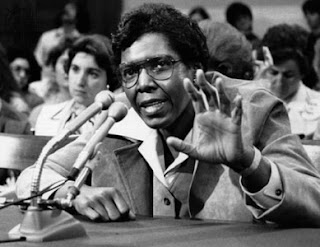 Through the process of amendment, interpretation, and court decision, I have finally been included in 'We, the people.'"

When I wrote up some notes on disabled members of Congress in the past, back in the fall, I didn't bring my survey far enough into the 20th century to include Barbara Jordan, born on this date in 1936, in Houston TX. Jordan earned a law degree at Boston University. In 1966, she became the first African-American woman to serve in the Texas Senate. She started her term in Congress in 1973--the same year she learned that she had multiple sclerosis. Important moments in her career included her service on the House Judiciary Committee, where she made a memorable televised speech in favor of Nixon's impeachment (audio and text available here), and her keynote address to the 1976 Democratic Convention. titled "Who, then, will speak for the common good?" (audio and text available here). Jordan left Congress for health reasons in 1979, was a professor at the University of Texas's Johnson School of Public Affairs, and died in 1996, at the age of 59. Before her death, she had lived for many years with her longtime significant other, Nancy Earl.

Today, there's a Barbara Jordan Media Award given annually by the Texas Governor's Committee on People with Disabilities for "accurate and positive" coverage of disability issues in print and broadcast media.
Posted by Penny L. Richards at 12:21 PM