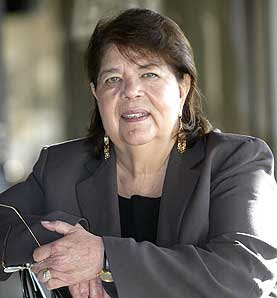 Today is the 62nd birthday of Wilma Mankiller (picture at right), the first woman to serve as principal chief of the Cherokee Nation. By the time she took office in 1985, she was also a disabled woman: a serious car accident in 1979 nearly took her leg. She underwent seventeen surgeries to reconstruct it, and says "to this day, I am not sure how I managed to regain mobility." Then in 1980 she was diagnosed with myasthenia gravis, a chronic neuromuscular condition. While she was Chief, she received a kidney transplant, after decades of kidney trouble (she had a second kidney transplant in 1998, the same year she was awarded the Presidential Medal of Freedom). Mankiller resigned from her position in 1995 after a cancer diagnosis. She lives on her ancestral allotment with her husband, not far from her daughters and grandchildren.
Posted by Penny L. Richards at 5:07 PM